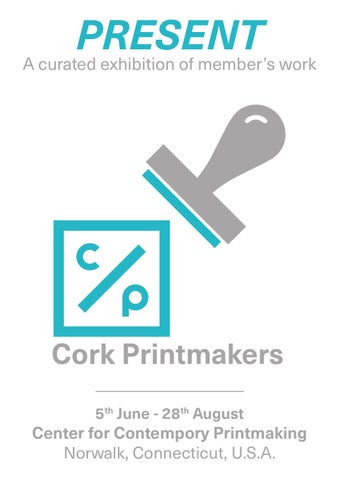 PRESENT Present is a deliciously multifarious word, one that conjures several generous interpretations - a gift, an introduction, an attendance, a moment in time. In selecting from the wealth of submissions to this proposition, I was keen to reflect the impressive range and variety of articulate responses which encompass every permutation of pressure and ink - from the wistful melancholy of Johnny Bugler’s sepia-toned beachscape photoetchings, to the discordant hyper colour of Killian Dwyer’s screen- prints, and the painterly richness of Jo Kelly’s lithograph and mezzotint. Importantly the works on offer here are as conceptually engaging as they are technically accomplished, demonstrating an evident critical awareness of the medium, often engaging and questioning its own limitations. This selection of work from fifteen members of the Cork Printmakers proposes a crosssection of what constitutes as testament to the vigour and vibrancy of the artistic practice facilitated by the institution, from traditional print processes as evidenced by the masterful fluency of Deirdre McKenna’s etchings, to photo-lens based media and digital technologies as explored by Marianne Keating’s coolly minimal digital prints. Cork Printmakers is the leading open access print-making facility in the South of Ireland, and over the twenty five years it’s been in operation, it has supported and fostered an impressive array of artistic practice from recent graduates to established practitioners. Present offers a liberality then, an introduction to the vibrancy of printmaking in Cork, and a tribute to the generosity of the institution that facilitates it.

Cork Printmakers Cork Printmakers, Cork, Ireland, is delighted to participate in this exhibition exchange programme with the Center for Contemporary Printmaking (CCP), Norwalk, U.S.A. Artist Members of the CCP had their work displayed, as part of the HORIZONS exhibition, at CIT Wandesford Quay Gallery, Wandesford Quay, Cork City, in February 2016. The PRESENT exhibition comprises thirty prints by fifteen artist members of Cork Printmakers. Artist Members of Cork Printmakers were invited to make print submissions through an Open Call Submission process. This exhibition is curated by Sarah Kelleher, who selected two prints each per artist. Sarah is a Ph.D. candidate in the History of Art Department at University College Cork and a Government of Ireland Scholar. The title PRESENT combines many layers of meaning – referring to time, the current moment and to the contemporary. Definitions include; the temporal sense; intermediate between past and future; now existing or happening or in consideration; being or existing in a specified place; something presented as a gift, to introduce, or to bring forward and present to the mind. The selected work represent the high quality of printmaking being created at the present time at Cork Printmakers, through a large variety of techniques and exploring a range of contemporary artistic concerns. Cork Printmakers is celebrating its 25th anniversary in 2016 and is marking this celebration with a variety of events and activities, including the launch of a new website, the rebranding of the organisation and acquisition of new equipment. This international exhibition is an integral part of the anniversary programme and our artists’ members are delighted to exhibit their work in CCP’s venue. This is a valuable opportunity for Cork Printmakers to consider its current position and look forward to a future with further innovative objectives. Cork Printmakers’ mission is to provide, manage and maintain an excellent printmaking facility, equipment and specialist materials. We address the technical concerns of artist printmakers; set and promote the highest standards of practice in printmaking; foster multi-disciplinary and innovative approaches to art practice; enable opportunities for artists through exhibitions and networking nationally and internationally. Cork Printmakers appreciates the support of Culture Ireland for this exhibition. Valerie Byrne Director, Cork Printmakers

Johnny Bugler studied art in the CIT Crawford College of Art &amp; Design, Cork and received a Masters in fine-art printmaking from Camberwell College of Art in London. He has exhibited internationally and is the recipient of Arts Council awards. Most recently he was selected for the UNFOLD Cork County Council Arts Office Professional Development Project and exhibition at Uillinn: West Cork Arts Centre. In 2015, in association with Cork Printmakers, Johnny was selected for the Cork City Council Arts Office Public Art Commission that resulted in the artwork Singers Corner. This body of artwork explores connections to place and the landscape. The images stem from travels in Asia and Africa and allude to the notion of the exotic idyll and Paradise Lost.

Debbie studied at the Limerick College of Art &amp; Design and the CIT Crawford College of Art &amp; Design, where she graduated with a Masters in Fine Art Research in 2002. Since then she has been working full-time as an artist and an art educator. Debbie currently lectures full-time in printmaking at C.S.N, Cork where she is the Course Director for level 6 Certificate in Art. Debbie has been involved in numerous group exhibitions including; Hope, Glór Arts Centre, Co. Clare, 2016; Tweet box, IMPACT 8, Hangzhou, China, 2015, Here and Now, Macroom Town Hall Gallery, 2014 &amp; 2015. Her work is in the collection of Cork Opera House, Port of Cork, O.P.W and University College Cork.

Eileen graduated from the CIT Crawford College of Art and Design, Cork in 1984. Her graduation show was selected by the Cork Arts Society for the Student of the Year Award. She has exhibited extensively throughout Ireland and abroad in numerous solo and group exhibitions. Eileen was awarded the Eli Lilly Purchase Prize in 2015 and 2014 at the Cork Printmakers’ annual exhibition. Group shows include; Impressions Exhibition, Galway, 2015 &amp; 2012; An Irish Connection-Australian and Irish Printmaking, The Tussock Gallery, Australia, 2014; Excavate, Cork Public Museum, 2010-2011; Ireland: Alphabet Series, Irish Arts Centre, New York, 2011; Editions, Lavit Gallery, Cork, 2010. Eileen’s work was featured in the Irish Arts Review, Winter Edition, 2012 as part of an article on the Cork Printmakers.

Deirdre is a native of Dingle town in West Kerry. She graduated from CIT Crawford College of Art &amp; Design in 1999. Recent exhibitions include; Cork Printmakers at the Lavit Gallery, Cork, 2015; Impressions Biennial, Galway, 2015; The Gathering, 2013 and Oireachtas Exhibition, 2008. She was awarded the Madghie Hughie Eoin Scholarship in 2013 and received bursaries and commissions from Ealain na Gaeltachta and Kerry County Council. Deirdre has taken part in residencies in Cill Rialaig artists’ retreat in Co. Kerry and at Clo Ceardlann na gCnoc, in Donegal. Her work is the collections of The Community Hospital, Dingle, Co. Kerry, The Skellig Hotel, Dingle, Co. Kerry and private collections in Ireland, UK, Switerland and U.S.A.

Peter completed his B.A. at the CIT Crawford College of Art &amp; Design in 2005 and currently works as a practicing artist and Technician at Cork Printmakers. He works in various artistic mediums enjoying the flexibility of exploring new techniques. Peter has exhibited both nationally and internationally and has completed a number of public art commissions. My work explores man’s position in this technological age – how we are reshaping and restricting patterns of social interaction and moving toward a technological extension of consciousness. It considers how our constant access to vast amounts of information can overwhelm our ability to process and reflect and examines how we interact with our landscape in this digital age.

Shane expertly employs silkscreen printing to record his travels and paint a unique contemporary picture of the world today. His hand-pulled graphic prints serve as a compelling and personal memento of his adventures, and combine colour printing with black and white to create limited edition screen-prints. As well as featuring at various exhibitions throughout Ireland, Shane’s artwork has been exhibited internationally, in New York, Australia and further afield. He has a number of works in the Irish Office of Public works. In the creation of my prints, I enjoy reducing the subject matter to a minimal state, then introduce bright complimentary colour-ways, to give additional weight to the composition.

Killian is a visual artist originally from Arkansas, U.S.A, currently living and working in Cork, Ireland. He received a first class honours for his B.A. in Fine Art from the CIT Crawford College of Art &amp; Design in 2015. He is a member and PrinTex coordinator at Sample Studios and a residency graduate at Backwater Artists Group. He has exhibited work both nationally around Ireland and abroad in countries such as Germany, China and in Hong Kong. Killian is a co-collaborator of Switchboard with artist Cillian Moynihan; a creative partnership involved in project-based interactions to encourage visual awareness and exhibition-making in Cork City and elsewhere. Killian also works as an arts administration and education facilitator in the Lewis Glucksman Gallery, Cork.

Kate graduated with a B.A. in Printmaking &amp; Contemporary Practice from Limerick School of Art &amp; Design in 2015 and received a 12-month Emerging Artist Bursary Award for Cork Printmakers. Originally from Kenmare in Co. Kerry, Kate started her own business NomNom Café and Gallery in her hometown at the age of 19. Community events quickly became the main focus of the café and her passion for community involvement led to establishing a community-driven festival in 2014 called NomShtock. The success of this festival and Kate’s continuing academic research in printmaking as a vehicle for social change led to the development of the Arts, Politics and Community free-sheet Rumpus and her involvement in The Limerick Spring Festival of politics and ideas.

The Project Twins are James and Michael Fitzgerald, a Cork based fine art and design duo. They both received a B.A. (Hons) in Visual Communication from CIT CCAD in 2005. They work across a broad range of disciplines including illustration, design, print-making, painting and three-dimensional work. Selected exhibitions include: Sticky Thoughts, Sternview Gallery, Cork, 2015; More Than One Maker, Irish Museum of Modern Art (IMMA), Dublin, 2015; Neutral, TULCA @ 126 Gallery, Galway, 2014; Deception &amp; Sacrifice, Academy of Art University, San Francisco, 2014 and Extinction, VISUAL Carlow, 2013. Their graphic work has garnered international attention from an array of clients with commissions from Facebook, Jameson and Aer Lingus, amongst others. The Project Twins are represented by Synergy Art in the UK and U.S.A, and by The Illustration Room in Australia.

Laura studied printmaking in GMIT’s Centre for Creative Arts + Media and graduated with a B.A.(first class honours) in 2014. She also received the Cork Printmakers’ Emerging Artist 12 Month Bursary. She has participated in exhibitions such as Personal Space, Hive Gallery, Waterford; Impressions 15, Galway, 2015 and the Lavit Gallery Summer Show 2015, Cork. Most recently her work was selected for Cork Printmakers’ exhibition at the Lavit Gallery, Cork, 2016. How we pass through and perceive our structured surroundings has begun to influence my work. As we navigate our immediate environment, negative and positive spaces shift and move, this interaction of planes is a catalyst for my creative process.

PRESENT is an exhibition featuring thirty prints by fifteen artist members of Cork Printmakers, which will be displayed at the Center for Contemporary Printmaking, Norwalk, Connecticut, U.S.A, from 5th June until the 28 August 2016. Selected Artists include: Johnny Bugler, Debbie Godsell, Séan Hanrahan, Catherine Hehir, Marianne Keating, Jo Kelley, Eileen Kennedy, Deirdre McKenna, Peter McMorris, Noelle Noonan, Shane O’ Driscoll, Killian O’ Dwyer, Kate O’ Shea, The Project Twins, and Laura Wade. This exhibition was curated by Sarah Kelleher, who is a Ph.D. candidate in the History of Art Department at University College Cork and a Government of Ireland Scholar. The title PRESENT combines many layers of meaning – referring to time, the current moment and to the contemporary. Cork Printmakers is celebrating its 25th anniversary in 2016 and is marking this celebration with a variety of events and activities, of which this international exhibition is an integral part.