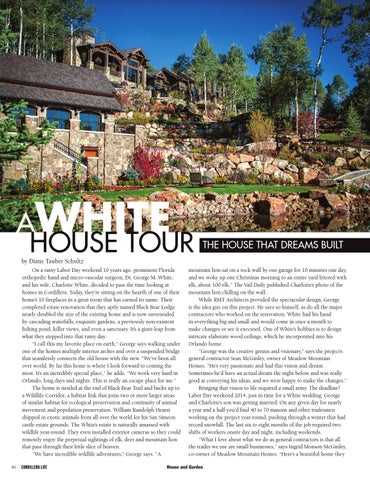 THE HOUSE THAT DREAMS BUILT

On a rainy Labor Day weekend 10 years ago, prominent Florida orthopedic hand and micro-vascular surgeon, Dr. George M. White, and his wife, Charlotte White, decided to pass the time looking at homes in Cordillera. Today, they’re sitting on the hearth of one of their home’s 10 fireplaces in a great room that has earned its name. Their completed estate renovation that they aptly named Black Bear Lodge nearly doubled the size of the existing home and is now surrounded by cascading waterfalls, exquisite gardens, a previously non-existent fishing pond, killer views, and even a sanctuary. It’s a giant leap from what they stepped into that rainy day. “I call this my favorite place on earth,” George says walking under one of the homes multiple interior arches and over a suspended bridge that seamlessly connects the old house with the new. “We’ve been all over world. By far this home is where I look forward to coming the most. It’s an incredibly special place,” he adds. “We work very hard in Orlando, long days and nights. This is really an escape place for me.” The home is nestled at the end of Black Bear Trail and backs up to a Wildlife Corridor, a habitat link that joins two or more larger areas of similar habitat for ecological preservation and continuity of animal movement and population preservation. William Randolph Hearst shipped in exotic animals from all over the world for his San Simeon castle estate grounds. The White’s estate is naturally amassed with wildlife year-round. They even installed exterior cameras so they could remotely enjoy the perpetual sightings of elk, deer and mountain lion that pass through their little slice of heaven. “We have incredible wildlife adventures,” George says. “A 46

mountain lion sat on a rock wall by our garage for 10 minutes one day, and we woke up one Christmas morning to an entire yard littered with elk, about 100 elk.” The Vail Daily published Charlotte’s photo of the mountain lion chilling on the wall. While RMT Architects provided the spectacular design, George is the idea guy on this project. He says so himself, as do all the major contractors who worked on the renovation. White had his hand in everything big and small and would come in once a month to make changes or see it executed. One of White’s hobbies is to design intricate elaborate wood ceilings, which he incorporated into his Orlando home. “George was the creative genius and visionary,” says the project’s general contractor Sean McGinley, owner of Meadow Mountain Homes. “He’s very passionate and had this vision and dream. Sometimes he’d have an actual dream the night before and was really good at conveying his ideas, and we were happy to make the changes.” Bringing that vision to life required a small army. The deadline? Labor Day weekend 2014, just in time for a White wedding. George and Charlotte’s son was getting married. On any given day for nearly a year and a half you’d find 40 to 70 masons and other tradesmen working on the project year-round, pushing through a winter that had record snowfall. The last six to eight months of the job required two shifts of workers onsite day and night, including weekends. “What I love about what we do as general contractors is that all the trades we use are small businesses,” says Ingrid Monson McGinley, co-owner of Meadow Mountain Homes. “Here’s a beautiful home they

Welcome to the 2015 summer issue of Cordillera Life Magazine. Our overall theme is the celebration of family beginning with our eight fashion pages of Cordillera's mothers and daughters. Cordillera is a community in the truest sense of the word, where lifelong friendships are forged and a sense of family is at its core. A common saying in the Valley is that people come for the skiing and stay for the summers. It's especially true in Cordillera with its abundance of summer activities complete with warm sunny days and cool nights. It doesn’t get any better than this. We hope you enjoy reading about all the people and amenities of this extraordinary mountain community in the Vail Valley. 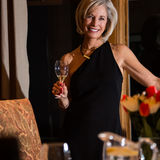