best of europe I: europe's most beautiful coins from antiquity to the renaissance 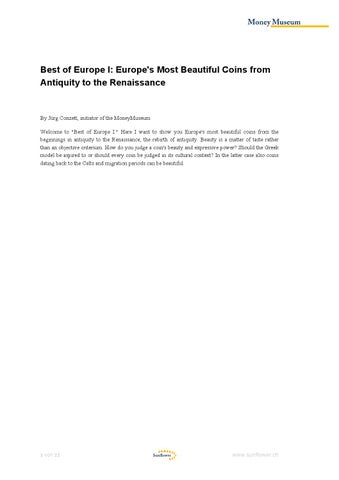 Best of Europe I: Europe&#39;s Most Beautiful Coins from Antiquity to the Renaissance

By Jürg Conzett, initiator of the MoneyMuseum Welcome to &quot;Best of Europe I.&quot; Here I want to show you Europe&#39;s most beautiful coins from the beginnings in antiquity to the Renaissance, the rebirth of antiquity. Beauty is a matter of taste rather than an objective criterium. How do you judge a coin&#39;s beauty and expressive power? Should the Greek model be aspired to or should every coin be judged in its cultural context? In the latter case also coins dating back to the Celts and migration periods can be beautiful.

Instead of portraying people, the oldest coins depicted the deities&#39; favourite animals, heraldic animals and emblems. The lion commanding respect was predestined for both categories. He can be traced on coins from antiquity through the Middle Ages right into modern times. Croesus is the best known representative of the Mermenade dynasty in Asia Minor. His coins depicted a lion attacking a bull head-on. As you will soon see, the representation of the lion and the bull had a deeper meaning.

Tetradrachm of the Macedonian city of Acanthus, made of silver, minted 525-470 BC

The lion attacking a bull also appeared on the coins of the Macedonian city of Acanthus in the latter half of the 6th century BC. The lion&#39;s concentrated strength and the way his mighty claws sink deep into the bull&#39;s flesh look amazingly real. The motif had a religious origin. When the bull&#39;s sign of the zodiac sinks on the horizon, the lion is at its zenith – the lion in the sky is quasi killing the bull. The cult of Mithras and the ritual killing of the bull later spread throughout the Roman Empire.

Decadrachm of the Sicilian city of Syracuse, made of silver, minted around 405-400 BC

Competitive economic pressure and high cultural achievements: the Greek colonial cities in Sicily fought bitter battles for political and economic supremacy in the 5th century BC. The battle for honour, consideration and power was not only waged on the battlefield, however, but also in studios and mints – the different cities used their coins both as means of payment, and of propaganda. The design on the large silver coins of Syracuse was a quadriga, a chariot drawn by four horses. The engravers tried hard to make the horses look ever more lifelike. The four-in-hand depicted here is so realistic that you can almost hear the snorting of the stallions and the thunder of their hooves.

Dekadrachm of the Sicilian city of Syracuse, made of silver, minted 405-400 BC

The beautiful nymph Arethusa on the reverse of the decadrachm from Syracuse comes across calmly and nobly. Arethusa was a nymph and later became a fountain on the island of Ortygia in Syracuse. Arethusa&#39;s transformation began when she was bathing in a clear stream, not knowing that she was observed by the river god Alpheus. He fell in love with her, but Arethusa fled and traveled under the sea to Sicily, where she reappeared in Ortygia as a spring.

Tetradrachm of the Sicilian city of Leontinoi, made of silver, minted around 455-430 BC

The Sicilian town of Leontinoi depicted the city god Apollo on her coins; Apollo&#39;s spiritual beauty transcended the barrier between male and female.

The Macedonian king Philip had his own reasons to depict Apollo on his gold staters in the 4th century BC. Philip wanted to prove his friendship to Greek culture, for he had the intention of spreading his kingdom into Asia Minor and needed the acceptance of the Greek cities there. The Apollo head has a thoughtful air; the image comes close to a portrait.

Daric of the Achaemenid dynasty, made of gold, minted probably under Artaxerxes II (404-359 BC)

Philip&#39;s claim to power was aimed against the Persian Great King who was ruling over an empire stretching from India to present-day Turkey – a great political power from the 6th century BC. The Persian imperial money was mainly used to bribe and influence the politically independent Greek citystates in the Aegean. The Persian Great King was represented as a stereotype with a ruler&#39;s attributes, but not with personal features.

Stater of the Thracian city of Abdera, made of silver, minted around 390 BC

This coin from around 390 BC depicts a griffin, a lion with an eagle&#39;s head and wings, the heraldic animal of the city of Abdera in Thrace (in present-day Greece).

Stater of the Greek city of Olympia, made of silver, minted around 363-343 BC

The fatherly god Zeus was also represented on coins – here on a stater from the Greek city of Elis, the Olympic venue. Elis struck coins only before the Olympic Games. This stater depicts almighty Zeus with a silky beard and a sensitive, spiritual gaze – the model for the later Christian God the Father.

Tetradrachm of the Macedonian king Philip II (359-336 BC), made of silver, minted in Pella around 342 BC

This is a coin from Philip II of Macedonia. The horse and rider exude concentrated strength: the horse with his powerful chest advancing in a collected walk, masterfully controlled and guided by a relaxed youth. Might this be a self-portrait of the ambitious king of Macedonia?

Tetradrachm of the Egyptian satrap Ptolemy I Soter (323-305/4 BC), made of silver, minted in Alexandria around 320 BC

Philip II was not granted to see the enormous Persian Empire capitulate: the triumph was his son&#39;s, Alexander III, better known as Alexander the Great. After Alexander&#39;s untimely death, his friend and co-fighter Ptolemy founded the Alexander cult in Egypt and elevated Alexander to a deity. This was the first step toward future portraits of lifelike people on coins. This image shows young Alexander as conqueror of India, wearing an elephant&#39;s scalp.

Tetradrachm of the Egyptian king Ptolemy I Soter (305-283 BC), made of silver, minted in Alexandria around 305 BC

After representing human beings on coins was no longer considered blasphemy, more and more rulers had themselves portrayed on their money, even if they did not boast the most regular features. The Macedonian Ptolemy I Soter depicted here was Alexander&#39;s friend and battlefield companion. He founded the Ptolemaic dynasty in Egypt, whose most famous descendant was none other than the famous Cleopatra II.

Roman dictators and later Roman emperors were illustrated on their coins as a matter of course. Eradicating the image of an emperor was considered as a national crime and punished by death. At the beginning of the 2nd century AD, Emperor Hadrian held sway over the empire&#39;s fate. As a cultivated lover of arts it went without saying that he commissioned only the most renowned artists with the creation of his portrait.

Dupondius of the Roman amperor Tiberius (14-37 AD), made of bronze, minted for his wife Livia Drusilla in Rome around 22-23 AD

It was difficult for women in antiquity to appear on coins. Livia succeeded in doing so – if only in the guise of the goddess Justitia, and not under her own name. Emperor Tiberius had every reason to immortalise his mother by commissioning the best artist: it was she who had made him emperor. Livia had lived through a difficult marriage with Augustus, the first Roman emperor, and his extra-marital affairs. Her sole aim was to see her son Tiberius from her first marriage ascend to the imperial throne – and her ambition paid off.

Marcus Aurelius, who reigned over the Roman Empire in the middle of the 2nd century AD, was not a really important emperor; his political and economic heritance was of little consequence. Yet there is no denying that the Stoic on the Roman throne had a good taste for arts. It is easy to tell from the portrait of the fine-featured emperor that war and the military were a horror for him.

Tremissis of the kingdom of the Lombards, made of gold, minted in Pavia around 650 AD

The migration period brought a renunciation from lifelike portraits. The Germanic princes and kings who had brought on the fall of the Roman Empire wanted their political position represented rather than their individual features. The portrait of a former Roman emperor on this coin struck in the upper Italian town of Pavia around 650 AD, was reduced to a few simple abstract lines that give it an almost modern touch.

The Germanic king Liutprand, who ruled over the kingdom of the Lombards as from 712, did not hold much with lifelike portraiture either. He felt it far more important to have his catholic belief recorded on the coin&#39;s reverse with the representation of Archangel Michael. Yet the imperial image on the obverse was so fine and sensitive that it still moves today&#39;s beholder.

Solidus of the Byzantine emperor Justinian II (second reign 705-711), made of gold, minted in Constantinople

Due to Christian belief, the ruler&#39;s portraits disappeared from the obverses of the coins from Byzantium around 705. This space was henceforth reserved for the portrait of Jesus Christ; the ruler had to make do with the reverse. This was not just for reasons of piety and modesty, however. By having Christ&#39;s portrait on the obverse, the ruler granted himself divine legitimisation for his office.

Histamenon of the Byzantine emperors Basil II and Constantine VIII (976-1025), made of gold, minted in Constantinople

The tradition of depicting Jesus Christ on the obverse and the ruler on the reverse of a coin was maintained in Byzantium – the Eastern Roman Empire – until after the turn of the millennium. Christ&#39;s image on this coin dates to 1005 and seems very real.

Half augustalis of the Holy Roman emperor Frederick II of Hohenstaufen (1220-1250), made of gold, minted in Brindisi

The designs on western European coins of the early and high Middle Ages showed coats of arms, letters, animals or buildings; rulers&#39; portraits were very rare. A coin like this one therefore came as a real surprise in 1230. The gold coin represented Frederick II of Hohenstaufen, emperor of the Holy Roman Empire, as legitimate heir of the antique Roman emperors. Frederick is wearing Roman robes and a laurel wreath. This coin was a first harbinger to the Renaissance.

The Renaissance, a return to ancient Greek culture and art, shook the medieval social order and ushered modern times into vast parts of Europe. The Renaissance focused on the here and now rather than looking towards the hereafter. Man was the creator and centre of attention. What better way of expressing the Renaissance attitude than lifelike portraits on the obverse of coins? Here we have Gian Galeazzo Maria Sforza, duke of Milan, on a double ducat struck in 1476.

best of europe I: europe's most beautiful coins from antiquity to the renaissance 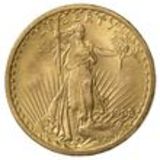