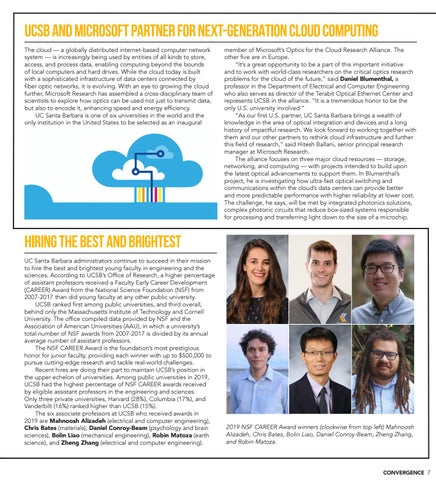 UCSB AND MICROSOFT PARTNER FOR NEXT-GENERATION CLOUD COMPUTING The cloud — a globally distributed internet-based computer network system — is increasingly being used by entities of all kinds to store, access, and process data, enabling computing beyond the bounds of local computers and hard drives. While the cloud today is built with a sophisticated infrastructure of data centers connected by ﬁber optic networks, it is evolving. With an eye to growing the cloud further, Microsoft Research has assembled a cross-disciplinary team of scientists to explore how optics can be used not just to transmit data, but also to encode it, enhancing speed and energy efﬁciency. UC Santa Barbara is one of six universities in the world and the only institution in the United States to be selected as an inaugural

member of Microsoft’s Optics for the Cloud Research Alliance. The other ﬁve are in Europe. “It’s a great opportunity to be a part of this important initiative and to work with world-class researchers on the critical optics research problems for the cloud of the future,” said Daniel Blumenthal, a professor in the Department of Electrical and Computer Engineering who also serves as director of the Terabit Optical Ethernet Center and represents UCSB in the alliance. “It is a tremendous honor to be the only U.S. university involved.” “As our ﬁrst U.S. partner, UC Santa Barbara brings a wealth of knowledge in the area of optical integration and devices and a long history of impactful research. We look forward to working together with them and our other partners to rethink cloud infrastructure and further this ﬁeld of research,” said Hitesh Ballani, senior principal research manager at Microsoft Research. The alliance focuses on three major cloud resources — storage, networking, and computing — with projects intended to build upon the latest optical advancements to support them. In Blumenthal’s project, he is investigating how ultra-fast optical switching and communications within the cloud’s data centers can provide better and more predictable performance with higher reliability at lower cost. The challenge, he says, will be met by integrated photonics solutions, complex photonic circuits that reduce box-sized systems responsible for processing and transferring light down to the size of a microchip.

HIRING THE BEST AND BRIGHTEST UC Santa Barbara administrators continue to succeed in their mission to hire the best and brightest young faculty in engineering and the sciences. According to UCSB’s Ofﬁce of Research, a higher percentage of assistant professors received a Faculty Early Career Development (CAREER) Award from the National Science Foundation (NSF) from 2007-2017 than did young faculty at any other public university. UCSB ranked ﬁrst among public universities, and third overall, behind only the Massachusetts Institute of Technology and Cornell University. The ofﬁce compiled data provided by NSF and the Association of American Universities (AAU), in which a university’s total number of NSF awards from 2007-2017 is divided by its annual average number of assistant professors. The NSF CAREER Award is the foundation’s most prestigious honor for junior faculty, providing each winner with up to $500,000 to pursue cutting-edge research and tackle real-world challenges. Recent hires are doing their part to maintain UCSB’s position in the upper echelon of universities. Among public universities in 2019, UCSB had the highest percentage of NSF CAREER awards received by eligible assistant professors in the engineering and sciences. Only three private universities, Harvard (28%), Columbia (17%), and Vanderbilt (16%) ranked higher than UCSB (15%). The six associate professors at UCSB who received awards in 2019 are Mahnoosh Alizadeh (electrical and computer engineering), Chris Bates (materials), Daniel Conroy-Beam (psychology and brain sciences), Bolin Liao (mechanical engineering), Robin Matoza (earth science), and Zheng Zhang (electrical and computer engineering). 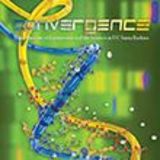