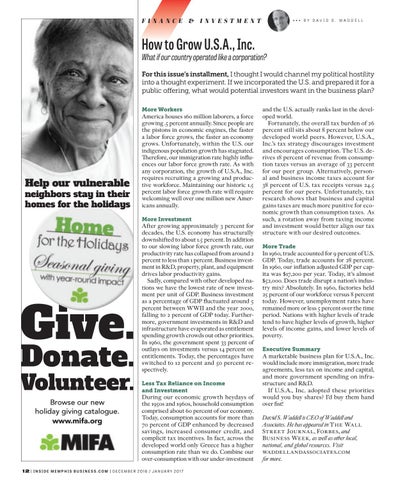 What if our country operated like a corporation? For this issue’s installment, I thought I would channel my political hostility into a thought experiment. If we incorporated the U.S. and prepared it for a public offering, what would potential investors want in the business plan?

neighbors stay in their homes for the holidays

More Workers America houses 160 million laborers, a force growing .5 percent annually. Since people are the pistons in economic engines, the faster a labor force grows, the faster an economy grows. Unfortunately, within the U.S. our indigenous population growth has stagnated. Therefore, our immigration rate highly influences our labor force growth rate. As with any corporation, the growth of U.S.A., Inc. requires recruiting a growing and productive workforce. Maintaining our historic 1.5 percent labor force growth rate will require welcoming well over one million new Americans annually. More Investment After growing approximately 3 percent for decades, the U.S. economy has structurally downshifted to about 1.5 percent. In addition to our slowing labor force growth rate, our productivity rate has collapsed from around 2 percent to less than 1 percent. Business investment in R&amp;D, property, plant, and equipment drives labor productivity gains. Sadly, compared with other developed nations we have the lowest rate of new investment per unit of GDP. Business investment as a percentage of GDP fluctuated around 5 percent between WWII and the year 2000, falling to 2 percent of GDP today. Furthermore, government investments in R&amp;D and infrastructure have evaporated as entitlement spending growth crowds out other priorities. In 1960, the government spent 33 percent of outlays on investments versus 14 percent on entitlements. Today, the percentages have switched to 12 percent and 50 percent respectively. Less Tax Reliance on Income and Investment During our economic growth heydays of the 1950s and 1960s, household consumption comprised about 60 percent of our economy. Today, consumption accounts for more than 70 percent of GDP enhanced by decreased savings, increased consumer credit, and complicit tax incentives. In fact, across the developed world only Greece has a higher consumption rate than we do. Combine our over-consumption with our under-investment

and the U.S. actually ranks last in the developed world. Fortunately, the overall tax burden of 26 percent still sits about 8 percent below our developed world peers. However, U.S.A., Inc.’s tax strategy discourages investment and encourages consumption. The U.S. derives 18 percent of revenue from consumption taxes versus an average of 33 percent for our peer group. Alternatively, personal and business income taxes account for 38 percent of U.S. tax receipts versus 24.5 percent for our peers. Unfortunately, tax research shows that business and capital gains taxes are much more punitive for economic growth than consumption taxes. As such, a rotation away from taxing income and investment would better align our tax structure with our desired outcomes. More Trade In 1960, trade accounted for 9 percent of U.S. GDP. Today, trade accounts for 28 percent. In 1960, our inflation adjusted GDP per capita was $17,200 per year. Today, it’s almost $52,000. Does trade disrupt a nation’s industry mix? Absolutely. In 1960, factories held 25 percent of our workforce versus 8 percent today. However, unemployment rates have remained more or less 5 percent over the time period. Nations with higher levels of trade tend to have higher levels of growth, higher levels of income gains, and lower levels of poverty. Executive Summary A marketable business plan for U.S.A., Inc. would include more immigration, more trade agreements, less tax on income and capital, and more government spending on infrastructure and R&amp;D. If U.S.A., Inc. adopted these priorities would you buy shares? I’d buy them hand over fist! David S. Waddell is CEO of Waddell and Associates. He has appeared in The Wall Street Journal, Forbes, and Business Week, as well as other local, national, and global resources. Visit waddellandassociates.com for more.

In this issue: Our Philanthropy Issue features a conversation with Spence & Becky Wilson of the Kemmons Wilson Family Foundation. Also: the year in Healthcare, inside Mayor Strickland's office, what West Memorial makes in Memphis, and more! 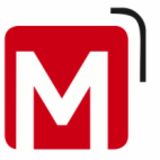