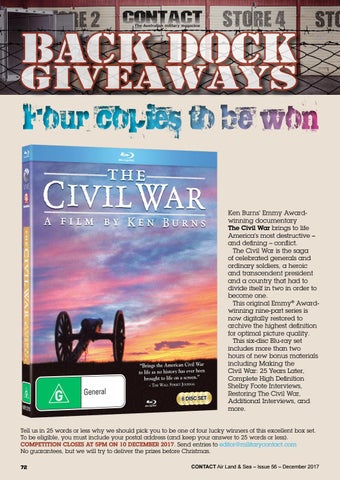 Four copies to be won

Ken Burns’ Emmy Awardwinning documentary The Civil War brings to life America’s most destructive – and defining – conflict. The Civil War is the saga of celebrated generals and ordinary soldiers, a heroic and transcendent president and a country that had to divide itself in two in order to become one. This original Emmy® Awardwinning nine-part series is now digitally restored to archive the highest definition for optimal picture quality. This six-disc Blu-ray set includes more than two hours of new bonus materials including Making the Civil War: 25 Years Later, Complete High Definition Shelby Foote Interviews, Restoring The Civil War, Additional Interviews, and more. Tell us in 25 words or less why we should pick you to be one of four lucky winners of this excellent box set. To be eligible, you must include your postal address (and keep your answer to 25 words or less). COMPETITION CLOSES AT 5PM ON 10 DECEMBER 2017. Send entries to editor@militarycontact.com No guarantees, but we will try to deliver the prizes before Christmas. 72 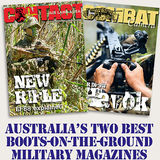