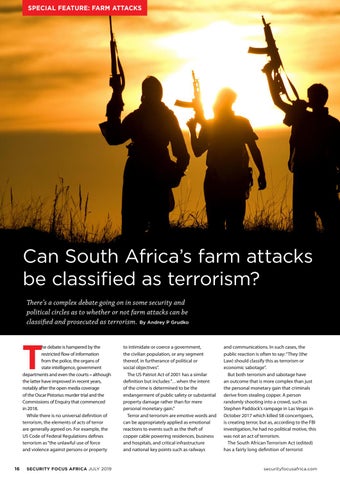 he debate is hampered by the restricted flow of information from the police, the organs of state intelligence, government departments and even the courts – although the latter have improved in recent years, notably after the open media coverage of the Oscar Pistorius murder trial and the Commissions of Enquiry that commenced in 2018. While there is no universal definition of terrorism, the elements of acts of terror are generally agreed on. For example, the US Code of Federal Regulations defines terrorism as “the unlawful use of force and violence against persons or property

to intimidate or coerce a government, the civilian population, or any segment thereof, in furtherance of political or social objectives”. The US Patriot Act of 2001 has a similar definition but includes “…when the intent of the crime is determined to be the endangerment of public safety or substantial property damage rather than for mere personal monetary gain.” Terror and terrorism are emotive words and can be appropriately applied as emotional reactions to events such as the theft of copper cable powering residences, business and hospitals, and critical infrastructure and national key points such as railways

and communications. In such cases, the public reaction is often to say: “They (the Law) should classify this as terrorism or economic sabotage”. But both terrorism and sabotage have an outcome that is more complex than just the personal monetary gain that criminals derive from stealing copper. A person randomly shooting into a crowd, such as Stephen Paddock’s rampage in Las Vegas in October 2017 which killed 58 concertgoers, is creating terror, but as, according to the FBI investigation, he had no political motive, this was not an act of terrorism. The South African Terrorism Act (edited) has a fairly long definition of terrorist 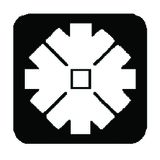