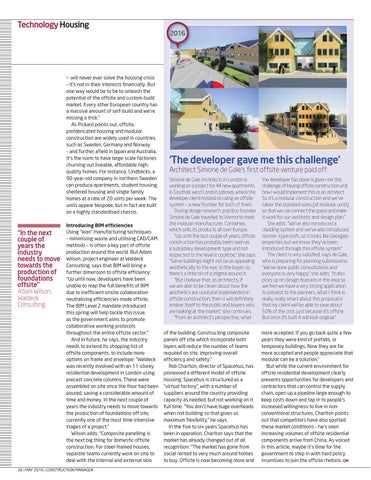 &gt; will never ever solve the housing crisis – it’s not in their interests financially. But one way would be to be to unleash the potential of the offsite and custom-build market. Every other European country has a massive amount of self-build and we’re missing a trick.” As Pickard points out, offsite, prefabricated housing and modular construction are widely used in countries such as Sweden, Germany and Norway – and further afield in Japan and Australia. It’s the norm to have large-scale factories churning out liveable, affordable highquality homes. For instance, Lindbäcks, a 90-year-old company in northern Sweden can produce apartments, student housing, sheltered housing and single family homes at a rate of 20 units per week. The units appear bespoke, but in fact are built on a highly standardised chassis.

“In the next couple of years the industry needs to move towards the production of foundations offsite” Adam Wilson, Waldeck Consulting

Introducing BIM efficiencies Using “lean” manufacturing techniques – minimising waste and utilising CAD/CAM methods – is often a key part of offsite production around the world. But Adam Wilson, project engineer at Waldeck Consulting, says that BIM will bring a further dimension to offsite efficiency: “Up until now, developers have been unable to reap the full benefits of BIM due to inefficient onsite collaboration neutralising efficiencies made offsite. The BIM Level 2 mandate introduced this spring will help tackle this issue, as the government aims to promote collaborative working protocols throughout the entire offsite sector.” And in future, he says, the industry needs to extend its shopping list of offsite components, to include more options on frame and envelope: “Waldeck was recently involved with an 11-storey residential development in London using precast concrete columns. These were assembled on site once the floor had been poured, saving a considerable amount of time and money. In the next couple of years the industry needs to move towards the production of foundations off site, currently one of the most time-intensive stages of a project.” Wilson adds: “Composite panelling is the next big thing for domestic offsite construction. For steel-framed houses, separate teams currently work on site to deal with the internal and external skin

‘The developer gave me this challenge’

Architect Simone de Gale’s first offsite venture paid off Simone de Gale Architects in London is working on a project for 44 new apartments in Southall, west London (above), where the developer client insisted on using an offsite system – a new frontier for both of them. During design research, practice founder Simone de Gale travelled to Vienna to meet the modular manufacturer, Containex, which sells its products all over Europe. “Up until the last couple of years, offsite construction has probably been seen as a subsidiary development type and not respected to the level it could be,” she says. “Some buildings might not be as appealing aesthetically to the eye, to the buyer, so there’s a little bit of a stigma around it. “But I believe that, as architects, if we are able to be clever about how the aesthetics are used and implemented in offsite construction, then it will definitely endear itself to the public and buyers who are looking at the market,” she continues. “From an architect’s perspective, what of the building. Constructing composite panels off site which incorporate both layers will reduce the number of teams required on site, improving overall efficiency and safety.” Rob Charlton, director of Spacehus, has pioneered a different model of offsite housing. Spacehus is structured as a “virtual factory”, with a number of suppliers around the country providing capacity as needed, but not working on it full time. “You don’t have huge overheads when not building so that gives us maximum flexibility,” he says. In the five to six years Spacehus has been in operation, Charlton says that the market has already changed out of all recognition: “The market has gone from social rented to very much around homes to buy. Offsite is now becoming more and

the developer has done is given me this challenge of having offsite construction and how I would implement this as an architect. So it’s a modular construction and we’ve taken the standard sizes [of modular units] so that we can connect the space and make it work for our aesthetic and design plan.” She adds: “We’ve also introduced a cladding system and we’ve also introduced dormer-type roofs, so it looks like Georgian properties but we know they’ve been introduced through this offsite system.” The client is very satisfied, says de Gale, who is preparing for planning submissions. “We’ve done public consultations and everyone is very happy,” she adds. “It also picks up on design features in the area so we feel we have a very strong application to present to the planners. What I think is really, really smart about this proposal is that my client will be able to save about 50% of the cost, just because it’s offsite. But once it’s built it will look original.” more accepted. If you go back quite a few years they were kind of prefabs, or temporary buildings. Now they are far more accepted and people appreciate that modular can be a solution.” But while the current environment for offsite residential development clearly presents opportunities for developers and contractors that can control the supply chain, open up a pipeline large enough to keep costs down and tap in to people’s increased willingness to live in nonconventional structures, Charlton points out that competitors have also spotted these market conditions – he’s seen increasing volumes of offsite residential components arrive from China. As voiced in this article, maybe it’s time for the government to step in with hard policy incentives to join the offsite rhetoric. CM 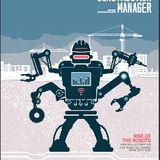