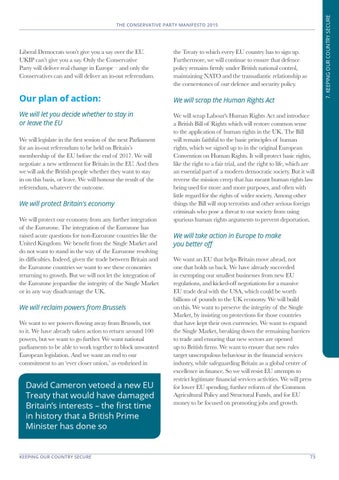 Our plan of action: We will let you decide whether to stay in or leave the EU We will legislate in the first session of the next Parliament for an in-out referendum to be held on Britain’s membership of the EU before the end of 2017. We will negotiate a new settlement for Britain in the EU. And then we will ask the British people whether they want to stay in on this basis, or leave. We will honour the result of the referendum, whatever the outcome.

We will reclaim powers from Brussels We want to see powers flowing away from Brussels, not to it. We have already taken action to return around 100 powers, but we want to go further. We want national parliaments to be able to work together to block unwanted European legislation. And we want an end to our commitment to an ‘ever closer union,’ as enshrined in

the Treaty to which every EU country has to sign up. Furthermore, we will continue to ensure that defence policy remains firmly under British national control, maintaining NATO and the transatlantic relationship as the cornerstones of our defence and security policy.

We will scrap the Human Rights Act We will scrap Labour&#39;s Human Rights Act and introduce a British Bill of Rights which will restore common sense to the application of human rights in the UK. The Bill will remain faithful to the basic principles of human rights, which we signed up to in the original European Convention on Human Rights. It will protect basic rights, like the right to a fair trial, and the right to life, which are an essential part of a modern democratic society. But it will reverse the mission creep that has meant human rights law being used for more and more purposes, and often with little regard for the rights of wider society. Among other things the Bill will stop terrorists and other serious foreign criminals who pose a threat to our society from using spurious human rights arguments to prevent deportation.

We will take action in Europe to make you better off We want an EU that helps Britain move ahead, not one that holds us back. We have already succeeded in exempting our smallest businesses from new EU regulations, and kicked-off negotiations for a massive EU trade deal with the USA, which could be worth billions of pounds to the UK economy. We will build on this. We want to preserve the integrity of the Single Market, by insisting on protections for those countries that have kept their own currencies. We want to expand the Single Market, breaking down the remaining barriers to trade and ensuring that new sectors are opened up to British firms. We want to ensure that new rules target unscrupulous behaviour in the financial services industry, while safeguarding Britain as a global centre of excellence in finance. So we will resist EU attempts to restrict legitimate financial services activities. We will press for lower EU spending, further reform of the Common Agricultural Policy and Structural Funds, and for EU money to be focused on promoting jobs and growth. 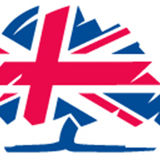