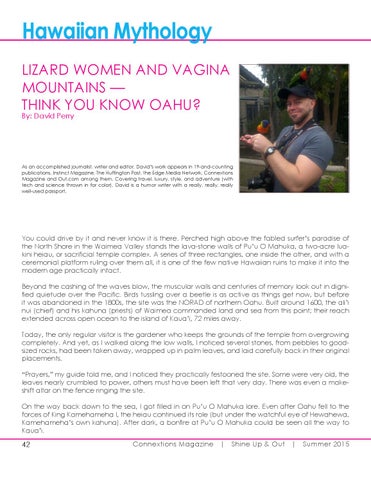 As an accomplished journalist, writer and editor, David’s work appears in 19-and-counting publications, Instinct Magazine, The Huffington Post, the Edge Media Network, Connextions Magazine and Out.com among them. Covering travel, luxury, style, and adventure (with tech and science thrown in for color), David is a humor writer with a really, really, really well-used passport.

You could drive by it and never know it is there. Perched high above the fabled surfer’s paradise of the North Shore in the Waimea Valley stands the lava-stone walls of Pu’u O Mahuka, a two-acre luakini heiau, or sacrificial temple complex. A series of three rectangles, one inside the other, and with a ceremonial platform ruling over them all, it is one of the few native Hawaiian ruins to make it into the modern age practically intact. Beyond the cashing of the waves blow, the muscular walls and centuries of memory look out in dignified quietude over the Pacific. Birds tussling over a beetle is as active as things get now, but before it was abandoned in the 1800s, the site was the NORAD of northern Oahu. Built around 1600, the ali’i nui (chief) and his kahuna (priests) of Waimea commanded land and sea from this point; their reach extended across open ocean to the island of Kaua’i, 72 miles away. Today, the only regular visitor is the gardener who keeps the grounds of the temple from overgrowing completely. And yet, as I walked along the low walls, I noticed several stones, from pebbles to goodsized rocks, had been taken away, wrapped up in palm leaves, and laid carefully back in their original placements. “Prayers,” my guide told me, and I noticed they practically festooned the site. Some were very old, the leaves nearly crumbled to power, others must have been left that very day. There was even a makeshift altar on the fence ringing the site. On the way back down to the sea, I got filled in on Pu’u O Mahuka lore. Even after Oahu fell to the forces of King Kamehameha I, the heiau continued its role (but under the watchful eye of Hewahewa, Kamehameha’s own kahuna). After dark, a bonfire at Pu’u O Mahuka could be seen all the way to Kaua’i.