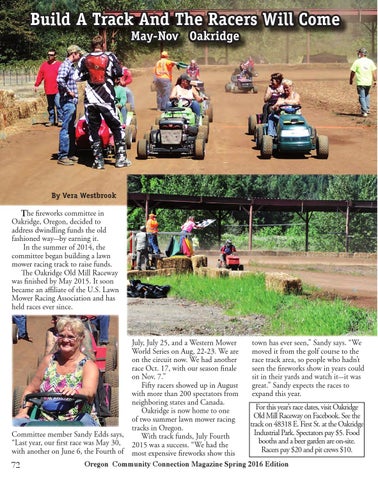 Build A Track And The Racers Will Come May-Nov Oakridge

The fireworks committee in

Oakridge, Oregon, decided to address dwindling funds the old fashioned way-by earning it. In the summer of 2014, the committee began building a lawn mower racing track to raise funds. The Oakridge Old Mill Raceway was finished by May 2015. It soon became an affiliate of the U.S. Lawn Mower Racing Association and has held races ever since.

town has ever seen,” Sandy says. “We July, July 25, and a Western Mower moved it from the golf course to the World Series on Aug, 22-23. We are race track area, so people who hadn’t on the circuit now. We had another seen the fireworks show in years could race Oct. 17, with our season finale sit in their yards and watch it-it was on Nov. 7.” great.” Sandy expects the races to Fifty racers showed up in August expand this year. with more than 200 spectators from neighboring states and Canada. For this year’s race dates, visit Oakridge Oakridge is now home to one Old Mill Raceway on Facebook. See the of two summer lawn mower racing track on 48318 E. First St. at the Oakridge tracks in Oregon. Industrial Park. Spectators pay $5. Food Committee member Sandy Edds says, With track funds, July Fourth booths and a beer garden are on-site. “Last year, our first race was May 30, 2015 was a success. “We had the Racers pay $20 and pit crews $10. with another on June 6, the Fourth of most expensive fireworks show this Oregon Community Connection Magazine Spring 2016 Edition 72 A magazine dedicated to the small town and rural communities that dot the Willamette Valley to the Oregon Coast. Our mission is to bring you...

A magazine dedicated to the small town and rural communities that dot the Willamette Valley to the Oregon Coast. Our mission is to bring you...