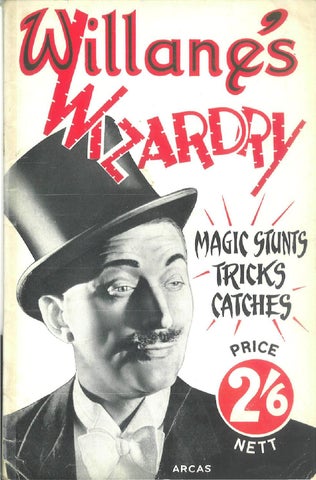 PRINTED AND PUBLISHED IN ENGLAND

HIS book contains endless entertainment for you and your friends, and represents part of my collection of &quot; tricky stunts &quot; which I have used for several years WITH GREAT SUCCESS —catches, puzzles, and tricks with which all magicians should be familiar. While many of them can be, and have been, performed on the stage, none requires any great amount of skill. For all that, each one should be tried over privately many times before you attempt to perform it to your friends. Neglect this necessary precaution and you will soon find how easy it is to produce a fiasco with even the simplest trick. You must also remember that a trick, in itself, is simply the vehicle upon which your personality is carried. If you practise until the working of the trick is automatic your whole attention can be given to &quot; presentation and timing.&quot; It is not what you do, but how you do it, that will establish your personality. Some of the effects described may seem so trivial that you may not think them worth while. For example, &quot; The Magic Knot,&quot; on page 36, although it appears to be very simple, is astounding in the hands of an accomplished performer. His hands do not even appear to approach each other and the knot appears as if by magic. You, too, can do these things. The key word is PRACTICE —not large, laborious closes of it, but frequent and regular short spells. Then what at first appeared so awkward soon becomes so natural that in time you wonder why you ever found it difficult. There is sufficient material in these pages to enable you to become the &quot; lion of the party,&quot; and every effect is worth doing—in its proper place, of course. I should have liked to have given credit to the originators of some of the tricks, but a magic stunt seems to make a round ; everyone does it for a while, and then it is forgotten for years, and no one knows who exactly invented or discovered it. I have not attempted to disclose the inner secrets of professional magic—such secrets are useless to anyone who is not prepared to spend months and months on the most diligent practice—but this book should help you to understand something of the intricacies of modern conjuring and to appreciate a good professional performance all the more.

Finally, I make no apology for the jumbled order in which the tricks appear. I have set them down just as they occurred to me. I am a conjurer—not an author. WILLANE. London, 194.7.

Dedicated My who always