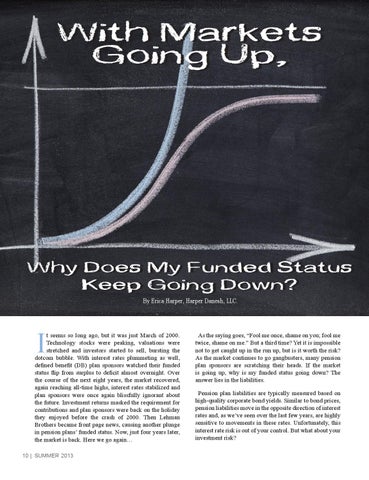 With Markets Going Up,

Why Why Does Does My My Funded Funded Status Status Keep Keep Going Going Down? Down? By Erica Harper, Harper Danesh, LLC.

t seems so long ago, but it was just March of 2000. Technology stocks were peaking, valuations were stretched and investors started to sell, bursting the dotcom bubble. With interest rates plummeting as well, defined benefit (DB) plan sponsors watched their funded status flip from surplus to deficit almost overnight. Over the course of the next eight years, the market recovered, again reaching all-time highs, interest rates stabilized and plan sponsors were once again blissfully ignorant about the future. Investment returns masked the requirement for contributions and plan sponsors were back on the holiday they enjoyed before the crash of 2000. Then Lehman Brothers became front page news, causing another plunge in pension plans’ funded status. Now, just four years later, the market is back. Here we go again… 10 | SUMMER 2013

As the saying goes, “Fool me once, shame on you; fool me twice, shame on me.” But a third time? Yet it is impossible not to get caught up in the run up, but is it worth the risk? As the market continues to go gangbusters, many pension plan sponsors are scratching their heads. If the market is going up, why is my funded status going down? The answer lies in the liabilities. Pension plan liabilities are typically measured based on high-quality corporate bond yields. Similar to bond prices, pension liabilities move in the opposite direction of interest rates and, as we’ve seen over the last few years, are highly sensitive to movements in these rates. Unfortunately, this interest rate risk is out of your control. But what about your investment risk?

In March of this year, the court case Tibble vs. Edison International (Tibble v. Edison Int’l, No. 10-56406 (9th Cir. 2013) made headlines within our industry. Since the case dealt with a number of important topics plan sponsors should be aware of, we’ve dedicated this issue of confero to both the case and topics it addresses. 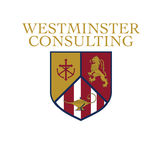