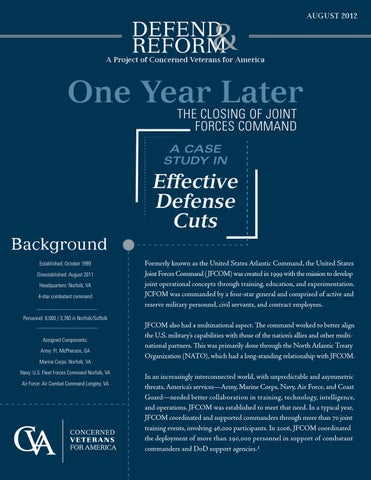 A Project of Concerned Veterans for America

One Year Later THE CLOSING OF JOINT FORCES COMMAND

A CASE STUDY IN

Formerly known as the United States Atlantic Command, the United States Joint Forces Command (JFCOM) was created in 1999 with the mission to develop joint operational concepts through training, education, and experimentation. JCFOM was commanded by a four-star general and comprised of active and reserve military personnel, civil servants, and contract employees. JFCOM also had a multinational aspect. The command worked to better align the U.S. military’s capabilities with those of the nation’s allies and other multinational partners. This was primarily done through the North Atlantic Treaty Organization (NATO), which had a long-standing relationship with JFCOM. In an increasingly interconnected world, with unpredictable and asymmetric threats, America’s services—Army, Marine Corps, Navy, Air Force, and Coast Guard—needed better collaboration in training, technology, intelligence, and operations. JFCOM was established to meet that need. In a typical year, JFCOM coordinated and supported commanders through more than 70 joint training events, involving 46,000 participants. In 2006, JFCOM coordinated the deployment of more than 290,000 personnel in support of combatant commanders and DoD support agencies.1