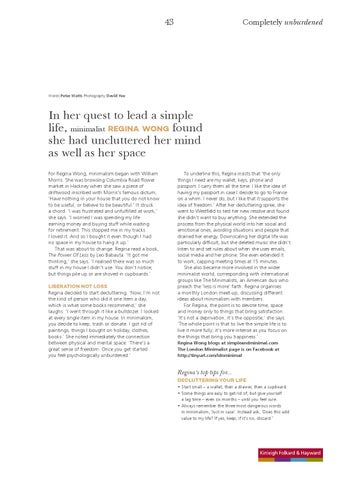 In her quest to lead a simple life, minimalist REGINA WONG found she had uncluttered her mind as well as her space For Regina Wong, minimalism began with William market in Hackney when she saw a piece of driftwood inscribed with Morris’s famous dictum, ‘Have nothing in your house that you do not know to be useful, or believe to be beautiful.’ It struck she says. ‘I worried I was spending my life earning money and buying stuff while waiting for retirement. This stopped me in my tracks. I loved it. And so I bought it even though I had no space in my house to hang it up.’ That was about to change. Regina read a book, The Power Of Less by Leo Babauta. ‘It got me thinking,’ she says. ‘I realised there was so much stuff in my house I didn’t use. You don’t notice, but things pile up or are shoved in cupboards.’ LIBERATION NOT LOSS Regina decided to start decluttering. ‘Now, I’m not the kind of person who did it one item a day, which is what some books recommend,’ she laughs. ‘I went through it like a bulldozer. I looked at every single item in my house. In minimalism, you decide to keep, trash or donate. I got rid of paintings, things I bought on holiday, clothes, books.’ She noted immediately the connection between physical and mental space. ‘There’s a great sense of freedom. Once you get started you feel psychologically unburdened.’

To underline this, Regina insists that ‘the only things I need are my wallet, keys, phone and passport. I carry them all the time. I like the idea of having my passport in case I decide to go to France on a whim. I never do, but I like that it supports the idea of freedom.’ After her decluttering spree, she she didn’t want to buy anything. She extended the process from the physical world into her social and emotional ones, avoiding situations and people that drained her energy. Downscaling her digital life was listen to and set rules about when she uses emails, social media and her phone. She even extended it to work, capping meeting times at 15 minutes. She also became more involved in the wider minimalist world, corresponding with international groups like The Minimalists, an American duo who preach the ‘less is more’ faith. Regina organises a monthly London meet-up, discussing different ideas about minimalism with members. For Regina, the point is to devote time, space and money only to things that bring satisfaction. ‘It’s not a deprivation, it’s the opposite,’ she says. ‘The whole point is that to live the simple life is to live it more fully; it’s more intense as you focus on the things that bring you happiness.’ Regina Wong blogs at simpleandminimal.com The London Minimalist page is on Facebook at http://tinyurl.com/ldnminimal

Regina’s top tips for... DECLUTTERING YOUR LIFE • Start small – a wallet, then a drawer, then a cupboard. • Some things are easy to get rid of, but give yourself a lag time – even six months – until you feel sure. • Always remember the three most dangerous words in minimalism, ‘Just in case’. Instead ask, ‘Does this add value to my life? If yes, keep; if it’s no, discard.’

We're dazzled by the capital's clearly brilliant glass artists. Inspired by the city's forward-thinkers, and motivated by those Londoners taking their first steps to everything from getting on the property ladder to setting up a new business. 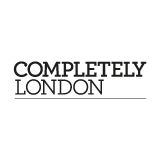