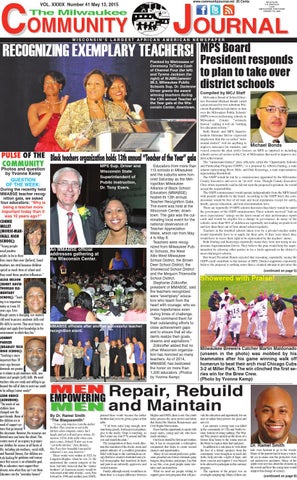 PULSE OF THE Black teachers organization holds 13th annual “Teacher of the Year” gala COMMUNITY Educators from more than MPS Sup. Driver and

During the recently held MMABSE teacher recognition gala, we asked four educators: “Why is being a teacher more important today than it was 10 years ago?” CONNIE MILLET (MORSE-MARSHALL HIGH SCHOOL): “Young people An MMABSE official need positive addresses gathering at adults to be in their the Wisconsin Center. lives more than ever (before). Good teachers are vital because children spend so much time at school and they need those positive influences.”

ALISA NELSON (HENRY DAVID THOREAU ELEMENTARY SCHOOL): “Teaching is as important today as it was 10 years ago. Even though society is changing, our students still need to possess academic skills and life skills to survive. They must learn to adapt and apply their knowledge to the environment in which they live.” JOHNNY PARKER (BRADLEY TECH HIGH SCHOOL): “Teaching is more important than 10 years ago because demands are greater as it relates to job readiness skills, academic and people (soft) skills. We need teachers who are ready and willing to go beyond the call of duty to assist our youth to be college/career ready!” LEON GROCE (AUDUBON): “The needs of our children have changed over the past decade. Many of the children are in need of support systems that go beyond the classroom. However, the resources are limited once you leave the school. This creates more of an urgency to prepare our children for success in all facets of life, including job readiness, social skills, and financial literacy. Our children are truly looking for guidance and reassurance that success is an attainable goal. We as educators must support their dreams even when they can’t see them. Educators are the “everyday heroes!”

115 schools in Milwaukee and the suburbs were honored Saturday as the Metropolitan Milwaukee Alliance of Black School Educators (MMABSE) hosted its 13th annual Teacher Recognition Gala. The event was held at the Wisconsin Center, downtown. The gala was the culminating local event for the national observance of Teacher Appreciation Week, which ran from May 4 to May 8. Teachers were recognized from Milwaukee Public Schools, the West Allis-West Milwaukee School District, the Brown Deer School District, the Shorewood School District and the Mequon-Thiensville School District. Stephanie Zollicoffer, president of MMABSE, said the teachers recognized were “exemplary” educators who teach from the heart with courage; who express hopefulness even during times of challenge. “We commend them for their outstanding efforts to close achievement gaps and to ensure that all students realize their goals, dreams and aspirations.” Zollicoffer added that no other Wisconsin organization has honored so many teachers. As of 2014, MMABSE has bestowed the honor on more than 1,200 educators. (Photos by Yvonne Kemp)

Milwaukee Board of School Directors President Michael Bonds called a plan released by two suburban Wisconsin Republican legislators to turn over the Milwaukee Public Schools’ (MPS) lowest performing schools to Milwaukee County “seriously flawed,” adding it will do “nothing for education reform.” Both Bonds and MPS Superintendent Darienne Driver expressed skepticism that the so-called “turnaround district” will do anything to improve outcomes for students, and Michael Bonds voiced concern the plan solely focuses on MPS as opposed to including schools across all sectors in the City of Milwaukee that need to improve student achievement. The “turnaround district” plan, officially called the “Opportunity Schools and Partnership Program (OSPP),” is a proposal by Alberta Darling, a state senator representing River Hills; and Dale Kooyenga, a state representative representing Brookfield. The OSPP would be run by a commissioner appointed by the Milwaukee County Executive and serve an “at-will” term. Though County Executive Chris Abele reportedly said he did not seek the proposed legislation, he would accept the responsibility. The OSPP commissioner would operate independently from the MPS board with parallel authority to the board. According to the OSPP brief, the commissioner would be free of all state and local regulations except for safety, health, special education, and non-discrimination laws. There are reportedly 55 MPS schools that more than likely would be under the governance of the OSPP commissioner. These schools received “fails to meet expectations” ratings on the latest round of state performance report cards and would be eligible for a change in governance. In many of the schools, more than 90% of children are reportedly not reading on grade level and less than three out of four attend school regularly. Teachers in the troubled schools taken over by a private/voucher entity would reportedly have to re-apply for their jobs. If they were hired, they would have to waive their right to be represented by the teachers’ union. Both Darling and Kooyenga reportedly stated they were not trying to undermine Superintendent Driver. They believe the plan would help the superintendent by allowing other parties to try a fresh approach in the district’s most challenged schools. But board President Bonds rejected that reasoning, reportedly saying the OSPP could contribute to the demise of MPS. District supporters reportedly believe the proposal is nothing more than a cloaked attempt to privatize the

Milwaukee Brewers Catcher Martin Maldonado (unseen in the photo) was mobbed by his teammates after his game winning walk off homerun to beat their arch rival Chicago Cubs 3-2 at Miller Park. The win clinched the first series win for the Brew Crew. (Photo by Yvonne Kemp)

“I, too, sing America. I am the darker brother. They send me to eat in the kitchen when company comes, but I laugh, and eat well and grow strong. Tomorrow, I’ll be at the table when company comes. Nobody’ll dare say to me, “eat in the kitchen,” then. Besides, they’ll see how beautiful I am and be ashamed. I, too, sing America.” These words were written in 1925, by Langston Hughes, when he was 23. He understood the current zeitgeist of the time, but fully believed that the “darker brothers” of American society would be welcomed at the table of unity-- soon. Fast forward to 1998 and another poet, DMX,

penned these words because the darker brothers had yet to be given a place at that table. “Y’all been eatin’ long enough, now stop being greedy. Just keep it real partner, give to the needy. Grips is touching, so don’t make me wait f**k around and bite you and snatch the plate.” The juxtaposition of these words illustrate the transition of the docile, meek and patient attitudes of a youthful generation filled with hope to the rambunctious energy that have created a frustrated and cynical demographic that manifests its hurts and pain in an outwardly aggressive and violent manner. Family, although society would have us think there is a major difference between

Hughes and DMX, there is not. Our youth today possess the same power and talent that fueled the Harlem Renaissance and Civil Rights Movements. I have had the opportunity to speak with many males, young and old, who have made mistakes. Our focus should be first on prevention; but, it has to encapsulate a redemptive component that helps to create second chances and opportunities. Many of our current professors, politicians, preachers are former criminals, gang bangers, drug dealers, and pimps. I say that to say this, even good people make mistakes and can transform. What we need are people willing to support grass root programs that will pro-

vide the education and opportunity for our men to utilize their powers for good and not evil. Last summer a young man was killed in the community of 17th and North Avenue. Instead of doing nothing, The Walnut Way project opened up the doors of a former drug house to the young men on the block to express their hurt and pain. In addition to a safe place to vent about the loss of a friend, speakers from the community were brought in to teach life skills, help provide a light of hope, and show concern and support. I was blessed to be allowed to participate in this summer program. The capstone of the project was an overnight camping trip. Many of these city

kids were hesitant to go in the woods. Many of the parents had to keep a watchful eye to make sure the protectors were not undercover predators. Many of the adults were nervous about the elements in the woods and how the young men would adapt to this change of scenery. 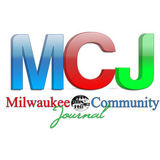