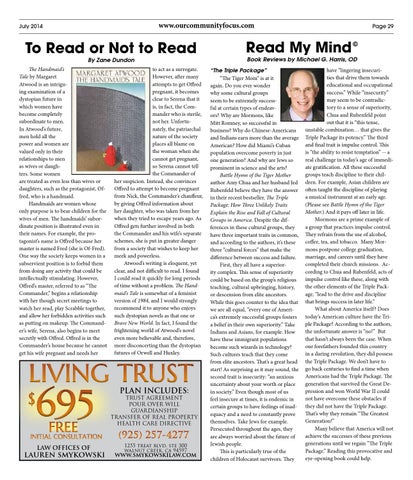 To Read or Not to Read By Zane Dundon

The Handmaid’s Tale by Margaret Atwood is an intriguing examination of a dystopian future in which women have become completely subordinate to men. In Atwood’s future, men hold all the power and women are valued only in their relationships to men as wives or daughters. Some women are treated as even less than wives or daughters, such as the protagonist, Offred, who is a handmaid. Handmaids are women whose only purpose is to bear children for the wives of men. The handmaids’ subordinate position is illustrated even in their names. For example, the protagonist’s name is Offred because her master is named Fred (she is Of-Fred). One way the society keeps women in a subservient position is to forbid them from doing any activity that could be intellectually stimulating. However, Offred’s master, referred to as “The Commander,” begins a relationship with her though secret meetings to watch her read, play Scrabble together, and allow her forbidden activities such as putting on makeup. The Commander’s wife, Serena, also begins to meet secretly with Offred. Offred is in the Commander’s house because he cannot get his wife pregnant and needs her

to act as a surrogate. However, after many attempts to get Offred pregnant, it becomes clear to Serena that it is, in fact, the Commander who is sterile, not her. Unfortunately, the patriarchal nature of the society places all blame on the woman when she cannot get pregnant, so Serena cannot tell the Commander of her suspicion. Instead, she convinces Offred to attempt to become pregnant from Nick, the Commander’s chauffeur, by giving Offred information about her daughter, who was taken from her when they tried to escape years ago. As Offred gets further involved in both the Commander and his wife’s separate schemes, she is put in greater danger from a society that wishes to keep her meek and powerless. Atwood’s writing is eloquent, yet clear, and not difficult to read. I found I could read it quickly for long periods of time without a problem. The Handmaid’s Tale is somewhat of a feminist version of 1984, and I would strongly recommend it to anyone who enjoys such dystopian novels as that one or Brave New World. In fact, I found the frightening world of Atwood’s novel even more believable and, therefore, more disconcerting than the dystopian futures of Orwell and Huxley.

“The Triple Package” “The Tiger Mom” is at it again. Do you ever wonder why some cultural groups seem to be extremely successful at certain types of endeavors? Why are Mormons, like Mitt Romney, so successful in business? Why do Chinese-Americans and Indians earn more than the average American? How did Miami’s Cuban population overcome poverty in just one generation? And why are Jews so prominent in science and the arts? Battle Hymn of the Tiger Mother author Amy Chua and her husband Jed Rubenfeld believe they have the answer in their recent bestseller, The Triple Package: How Three Unlikely Traits Explain the Rise and Fall of Cultural Groups in America. Despite the differences in these cultural groups, they have three important traits in common, and according to the authors, it’s these three “cultural forces” that make the difference between success and failure. First, they all have a superiority complex. This sense of superiority could be based on the group’s religious teaching, cultural upbringing, history, or descension from elite ancestors. While this goes counter to the idea that we are all equal, “every one of America’s extremely successful groups fosters a belief in their own superiority.” Take Indians and Asians, for example. How have these immigrant populations become such wizards in technology? Such cultures teach that they come from elite ancestors. That’s a great head start! As surprising as it may sound, the second trait is insecurity: “an anxious uncertainty about your worth or place in society.” Even though most of us feel insecure at times, it is endemic in certain groups to have feelings of inadequacy and a need to constantly prove themselves. Take Jews for example. Persecuted throughout the ages, they are always worried about the future of Jewish people. This is particularly true of the children of Holocaust survivors. They

have “lingering insecurities that drive them towards educational and occupational success.” While “insecurity” may seem to be contradictory to a sense of superiority, Chua and Rubenfeld point out that it is “this tense, unstable combination… that gives the Triple Package its potency.” The third and final trait is impulse control. This is “the ability to resist temptation” -- a real challenge in today’s age of immediate gratification. All these successful groups teach discipline to their children. For example, Asian children are often taught the discipline of playing a musical instrument at an early age. (Please see Battle Hymn of the Tiger Mother.) And it pays off later in life. Mormons are a prime example of a group that practices impulse control. They refrain from the use of alcohol, coffee, tea, and tobacco. Many Mormons postpone college graduation, marriage, and careers until they have completed their church missions. According to Chua and Rubenfeld, acts of impulse control like these, along with the other elements of the Triple Package, “lead to the drive and discipline that brings success in later life.” What about America itself? Does today’s American culture have the Triple Package? According to the authors, the unfortunate answer is “no!” But that hasn’t always been the case. When our forefathers founded this country in a daring revolution, they did possess the Triple Package. We don’t have to go back centuries to find a time when Americans had the Triple Package. The generation that survived the Great Depression and won World War II could not have overcome these obstacles if they did not have the Triple Package. That’s why they remain “The Greatest Generation!” Many believe that America will not achieve the successes of these previous generations until we regain “The Triple Package.” Reading this provocative and eye-opening book could help.