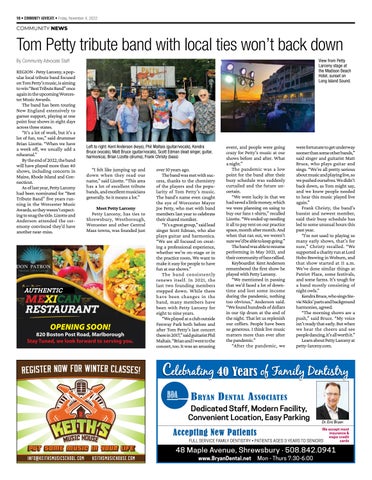 Tom Petty tribute band with local ties won’t back down By Community Advocate Staff REGION - Petty Larceny, a popular local tribute band focused on Tom Petty’s music, is aiming to win “Best Tribute Band” once again in the upcoming Worcester Music Awards. The band has been touring New England extensively to garner support, playing at one point four shows in eight days across three states. “It’s a lot of work, but it’s a lot of fun, too,” said drummer Brian Lizotte. “When we have a week off, we usually add a rehearsal.” By the end of 2022, the band will have played more than 40 shows, including concerts in Maine, Rhode Island and Connecticut. As of last year, Petty Larceny had been nominated for “Best Tribute Band” five years running in the Worcester Music Awards, so they weren’t expecting to snag the title. Lizotte and Anderson attended the ceremony convinced they’d have another near-miss.

“I felt like jumping up and down when they read our name,” said Lizotte. “This area has a lot of excellent tribute bands, and excellent musicians generally. So it means a lot.” Meet Petty Larceny Petty Larceny, has ties to Shrewsbury, Westborough, Worcester and other Central Mass towns, was founded just

over 10 years ago. The band was met with success, thanks to the chemistry of the players and the popularity of Tom Petty’s music. The band’s name even caught the eye of Worcester Mayor Joe Petty, who met with band members last year to celebrate their shared moniker. “It’s a great group,” said lead singer Scott Edman, who also plays guitar and harmonica. “We are all focused on creating a professional experience, whether we’re on-stage or in the practice room. We want to make it easy for people to have fun at our shows.” The band consistently renews itself. In 2021, the last two founding members stepped down. While there have been changes in the band, many members have been with Petty Larceny for eight to nine years. “We played at a club outside Fenway Park both before and after Tom Petty’s last concert there in 2017,” said guitarist Phil Maltais. “Brian and I went to the concert, too. It was an amazing

event, and people were going crazy for Petty’s music at our shows before and after. What a night.” The pandemic was a low point for the band after their busy schedule was suddenly curtailed and the future uncertain. “We were lucky in that we had saved a little money, which we were planning on using to buy our fans t-shirts,” recalled Lizotte. “We ended up needing it all to pay rent on our practice space, month after month. And when that ran out, we weren’t sure we’d be able to keep going.” The band was able to resume performing in May 2021, and their community of fans rallied. Keyboardist Kent Anderson remembered the first show he played with Petty Larceny. “We mentioned in passing that we’d faced a lot of downtime and lost some income during the pandemic, nothing too obvious,” Anderson said. “We found hundreds of dollars in our tip drum at the end of the night. That let us replenish our coffers. People have been so generous. I think live music matters more than ever after the pandemic.” “After the pandemic, we

were fortunate to get underway sooner than some other bands,” said singer and guitarist Matt Bruce, who plays guitar and sings. “We’re all pretty serious about music and playing live, so we pushed ourselves. We didn’t back down, as Tom might say, and we knew people needed to hear this music played live again.” Frank Christy, the band’s bassist and newest member, said their busy schedule has led to some unusual hours this past year. “I’m not used to playing so many early shows, that’s for sure,” Christy recalled. “We supported a charity run at Lord Hobo Brewing in Woburn, and that show started at 11 a.m. We’ve done similar things at Patriot Place, some festivals, and some farms. It’s tough for a band mostly consisting of night owls.” Kendra Bruce, who sings Stevie Nicks’ parts and background harmonies, agreed. “The morning shows are a push,” said Bruce. “My voice isn’t ready that early. But when we hear the cheers and see people dancing, it’s all worth it.” Learn about Petty Larceny at petty-larceny.com.