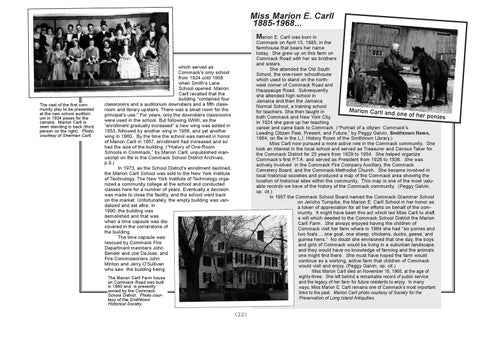 The cast of the first community play to be presented at the new school auditorium in 1924 poses for the camera. Marion Carll is seen standing in back (third person on the right). Photo courtesy of Sherman Carll.

Commack on April 13, 1885, in the farmhouse that bears her name today. She grew up on this farm on Commack Road with her six brothers and sisters. She attended the Old South School, the one-room schoolhouse which used to stand on the northwest corner of Commack Road and Hauppauge Road. Subsequently she attended high school in Jamaica and then the Jamaica Normal School, a training school Marion Carll an for teachers. She then taught in d one of her po nies both Commack and New York City. In 1924 she gave up her teaching career and came back to Commack. (“Portrait of a citizen: Commack’s Leading Citizen Past, Present, and Future,” by Peggy Galvin, Smithtown News, 1964, on file in the L.I. History Room of the Smithtown Library.) Miss Carll now pursued a more active role in the Commack community. She took an interest in the local school and served as Treasurer and Census Taker for the Commack District for 25 years from 1929 to 1954. She helped organize Commack’s first P.T.A. and served as President from 1926 to 1936. She was actively involved in the Commack Fire Company Auxillary, the Commack Cemetery Board, and the Commack Methodist Church. She became involved in local historical societies and produced a map of the Commack area showing the location of historical sites within the community. This map is one of the most valuable records we have of the history of the Commack community. (Peggy Galvin, op. cit.) In 1957 the Commack School Board named the Commack Grammar School on Jericho Turnpike, the Marion E. Carll School in her honor as a token of appreciation for all her efforts on behalf of the community. It might have been this act which led Miss Carll to draft a will which deeded to the Commack School District the Marion Carll Farm. She always enjoyed having the children of Commack visit her farm where in 1964 she had “six ponies and two foals..., one goat, one sheep, chickens, ducks, geese, and guinea hens.” No doubt she envisioned that one day, the boys and girls of Commack would be living in a suburban landscape, and they would have no knowledge of farming and the animals one might find there. She must have hoped the farm would continue as a working, active farm that children of Commack would visit and enjoy. (Peggy Galvin, op. cit.) Miss Marion Carll died on November 16, 1968, at the age of eighty-three. She left behind a remarkable record of public service and the legacy of her farm for future residents to enjoy. In many ways, Miss Marion E. Carll remains one of Commack’s most important links to the past. Marion Carll photo courtesy of Society for the Preservation of Long Island Antiquities.

which served as Commack's only school from 1924 until 1958 when Smith’s Lane School opened. Marion Carll recalled that the building "contained four classrooms and a auditorium downstairs and a fifth classroom and library upstairs. There was a small room for the principal’s use." For years, only the downstairs classrooms were used in the school. But following WWII, as the “enrollment gradually increased” a new wing was added in 1953, followed by another wing in 1956, and yet another wing in 1960. By the time the school was named in honor of Marion Carll in 1957, enrollment had increased and so had the size of the building. ("History of One-Room Schools in Commack,” by Marion Carll, unpublished manuscript on file in the Commack School District Archives, p.8.) In 1973, as the School District's enrollment declined, the Marion Carll School was sold to the New York Institute of Technology. The New York Institute of Technology organized a community college at the school and conducted classes here for a number of years. Eventually a decision was made to close the facility, and the school went back on the market. Unfortunately, the empty building was vandalized and set afire. In 1990, the building was demolished and that was when a time capsule was discovered in the cornerstone of the building. The time capsule was rescued by Commack Fire Department members John Bender and Joe DeJose, and Fire Commissioners John Minton and Jerry O'Sullivan who saw the building being The Marion Carll Farm house on Commack Road was built in 1860 and is presently owned by the Commack School District. Photo courtesy of the Smithtown Historical Society. 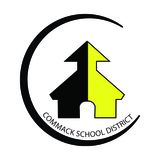