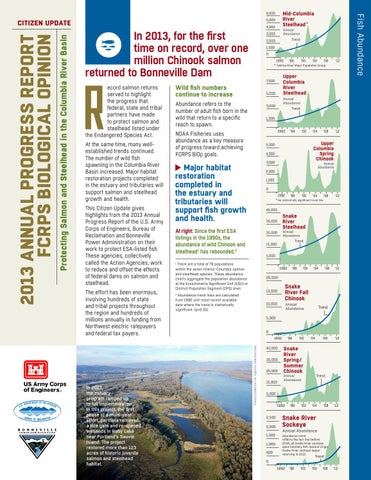 In 2013, for the first time on record, over one million Chinook salmon returned to Bonneville Dam ecord salmon returns served to highlight the progress that federal, state and tribal partners have made to protect salmon and steelhead listed under the Endangered Species Act. At the same time, many wellestablishedPhoto trends continued. The number of wild fish spawning in the Columbia River Basin increased. Major habitat restoration projects completed in the estuary and tributaries will support salmon and steelhead growth and health. This Citizen Update gives highlights from the 2013 Annual Progress Report of the U.S. Army Corps of Engineers, Bureau of Reclamation and Bonneville Power Administration on their work to protect ESA-listed fish. These agencies, collectively called the Action Agencies, work to reduce and offset the effects of federal dams on salmon and steelhead. The effort has been enormous, involving hundreds of state and tribal projects throughout the region and hundreds of millions annually in funding from Northwest electric ratepayers and federal tax payers.

In 2013, the estuary program ramped up to full implementation. In this project, the first phase of a multi-year effort, partners removed a tide gate and re-opened wetlands in Ruby Lake near Portland’s Sauvie Island. The project restored more than 123 acres of historic juvenile salmon and steelhead habitat.

Abundance refers to the number of adult fish born in the wild that return to a specific reach to spawn.

Major habitat restoration completed in the estuary and tributaries will support fish growth and health.

At right: Since the first ESA listings in the 1990s, the abundance of wild Chinook and steelhead 1 has rebounded.2

There are a total of 78 populations within the seven Interior Columbia salmon and steelhead species. These abundance charts aggregate the population abundance at the Evolutionarily Significant Unit (ESU) or Distinct Population Segment (DPS) level.

Abundance trend lines are calculated from 1990 until most recent available data where the trend is statistically significant. (p&lt;0.05)

Protecting Salmon and Steelhead in the Columbia River Basin

PHOTO COURTESY OF IDAHO DEPARTMENT OF FISH AND GAME

Stream complexity creates more natural conditions for fish Project sponsors improved 3,535 acres (5.5 square miles) of riparian habitat and 35 miles of streams in the Columbia Basin by installing large wood structures and enhancing side channels and meanders. Research shows both salmon and steelhead are spawning in greater numbers in these newly improved reaches.

Through water transactions and irrigation improvements, Action Agencies secured 45,253 acre feet of water. These flows increase important fish habitat in the Columbia Basin and have been demonstrated to benefit fish survival.

In 2013, Action Agencies completed eight habitat projects and greatly increased the survival benefits achieved for salmon and steelhead in the estuary.1 Partner organizations have expanded their capacity to develop large, complex projects and built relationships with landowners in estuary communities. The Agencies have developed an extensive pipe¬line of future estuary projects.

Growing benefits in the estuary for migrating salmon

1 The methodology for estimating the survival benefits of estuary habitat restoration actions combines the physical attributes of projects with research findings and expert judgment to derive a number of Survival Benefit Units expected.

Avian predators in the estuary, actions underway to manage

Kelt reconditioning makes significant progress Kelts are steelhead that survive to spawn again in subsequent years. Kelt reconditioning seeks to improve the health and strength of the fish after it has spawned, increasing the chance for it to spawn again. The reconditioning facility for Snake River B-Run kelts at Dworshak National Fish Hatchery in Ahsahka, Idaho, became capable of full implementation in 2013. For the first time, kelts were collected from tributaries, where they are typically in better condition than those collected at Lower Granite Dam. In 2013, 69 wild female B-Run kelts were reconditioned and returned to the Snake River to spawn again.

◗ The Corps continued work on the management plan and NEPA document for managing Caspian tern predation in inland areas.

◗ The population of doublecrested cormorants expanded to about 14,916 breeding pairs, about 15 percent larger than in 2011-2012. The Corps continued work with U.S. Fish and Wildlife Service and the states of Oregon and Washington on an Environmental Impact Statement evaluating options for managing cormorants. The final EIS will be published this winter.

◗ California sea lion presence below Bonneville Dam and their total consumption of salmon and steelhead has declined in recent years. At the same time, protected Steller sea lion numbers and consumption have increased. They are now responsible for approximately half of the salmon consumed. ◗ The estimated 2013 catch in the pikeminnow sport reward program was 10.8 percent of the population.

Consumption of juvenile salmon and steelhead on East Sand Island

After extensive habitat improvements, 80 percent of the juvenile Chinook reared in Little Springs Creek, pictured here, survived to emigrate from the Lemhi River—up from 29 percent in 2012.

The 2013 estimates of subyearling Chinook dam passage survival at Little Goose and Lower Monumental dams were 90.76 and 92.97 percent, respectively. (The 2012 estimates, at 97.89 and 95.08 percent, exceeded the performance standard.) The Corps, in coordination with NOAA and the other Action Agencies, is reviewing the 2012/2013 testing results to assess the cause of this difference and determine the next steps to satisfy the performance standards for subyearling Chinook at Little Goose Dam.

Partnerships and science put us on track for BiOp goals

Research continues to confirm the success of our efforts. Intensive habitat monitoring in 2013, for instance, showed that salmon and steelhead quickly return to reopened habitat, spawn in greater numbers in restored reaches and increase in abundance following treatment.

Counts include listed and non-listed salmon and steelhead, hatchery and wild fish.

The Action Agencies, with the help of our partners, are on track to achieve the FCRPS BiOp targets for the hydro performance, habitat quality improvements, predator management, and hatchery actions by 2018.

Most important, more fish—and more wild fish— returned to the river. There is still more to accomplish in the final years of this BiOp, but solid partnerships and sound science have put us on the path to get there.

In 2013, travel time through the hydropower system was shorter than the five years before the BiOp for steelhead and about the same for Chinook. Steelhead travel near the water surface, so they appear to be getting the greatest benefit from surface passage.

ver the past decade, juvenile fish survival past the dams has improved through dam modifications and improved operations designed to achieve the juvenile dam passage survival performance standards specified in the FCRPS BiOp. Modifications to juvenile fish bypass systems and turbines and the addition of surface passage at the Corps’ eight dams on the lower Snake and lower Columbia rivers have improved juvenile passage, minimized exposure to predation,

Juvenile fish survival past the dams has improved substantially

Columbia River Basin federal agencies report on their 2013 progress to protect salmon and steelhead listed under the Endangered Species Act. The effort involves hundreds of state and tribal projects over three states. More fish - and more wild fish - are returning to the river.