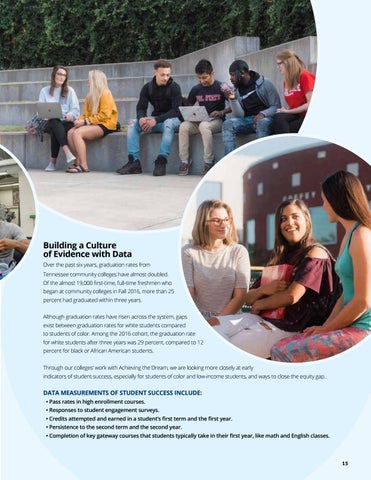 Building a Culture of Evidence with Data Over the past six years, graduation rates from Tennessee community colleges have almost doubled. Of the almost 19,000 first-time, full-time freshmen who began at community colleges in Fall 2016, more than 25 percent had graduated within three years. Although graduation rates have risen across the system, gaps exist between graduation rates for white students compared to students of color. Among the 2016 cohort, the graduation rate for white students after three years was 29 percent, compared to 12 percent for black or African American students. Through our colleges’ work with Achieving the Dream, we are looking more closely at early indicators of student success, especially for students of color and low-income students, and ways to close the equity gap..

DATA MEASUREMENTS OF STUDENT SUCCESS INCLUDE: • Pass rates in high enrollment courses. • Responses to student engagement surveys. • Credits attempted and earned in a student’s first term and the first year. • Persistence to the second term and the second year. • Completion of key gateway courses that students typically take in their first year, like math and English classes. 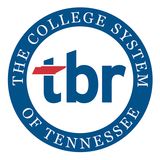 TBR | The College System of Tennessee