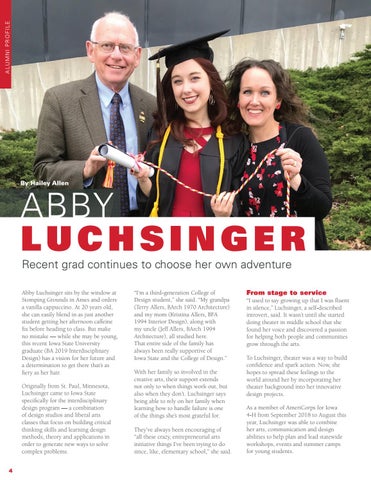 “The goal of all of our arts programs is to really give high school kids across Iowa the opportunity to learn new skills and new design tools in a low-stress environment that’s focused more on exploration than on the finished product,” she said.

now is the time to explore things and discover what they’re capable of, and then go beyond that,” she said. Luschsinger’s background in theater and summer camps makes her well-versed in mentoring young people. Although it’s

Opposite: Three generations of College of Design graduates: Luchsinger with her grandfather, Terry Allers, and mother, Kristina Allers, at commencement in May. Below: At the National 4-H Youth Photography Summit. Photos courtesy of Abby Luchsinger.

I transform this and use it to build communities? This same process that you use for a studio project could be used in a business model, as a nonprofit arts incentive to stage immersive performance experiences like ‘The Point!’ using local musicians and bringing people out to their local parks,” Luchsinger explained. She pitched that same idea at the Great Iowa State Pitch Off: Standing Innovation at the state fair in August and advanced to the finals. “I love getting new feedback and perspectives each time,” she said.

Building communities Although she didn’t expect it, through her service with AmeriCorps and time spent in Ames for college, Luchsinger says she’s fallen in love with Iowa. To her, there’s something special about small-town living.

“Getting to know people in the little coffee shops and the diners and saying ‘okay, this is what this community is like; how specifically could the arts be used in this place?’ and then creating a way to better serve the people that make that specific area unique” is her focus.

ABBY LUCHSINGER Recent grad continues to choose her own adventure Abby Luchsinger sits by the window at Stomping Grounds in Ames and orders a vanilla cappuccino. At 20 years old, she can easily blend in as just another student getting her afternoon caffeine fix before heading to class. But make no mistake — while she may be young, this recent Iowa State University graduate (BA 2019 Interdisciplinary Design) has a vision for her future and a determination to get there that’s as fiery as her hair. Originally from St. Paul, Minnesota, Luchsinger came to Iowa State specifically for the interdisciplinary design program — a combination of design studios and liberal arts classes that focus on building critical thinking skills and learning design methods, theory and applications in order to generate new ways to solve complex problems. 4

“I’m a third-generation College of Design student,” she said. “My grandpa (Terry Allers, BArch 1970 Architecture) and my mom (Kristina Allers, BFA 1994 Interior Design), along with my uncle (Jeff Allers, BArch 1994 Architecture), all studied here. That entire side of the family has always been really supportive of Iowa State and the College of Design.” With her family so involved in the creative arts, their support extends not only to when things work out, but also when they don’t. Luchsinger says being able to rely on her family when learning how to handle failure is one of the things she’s most grateful for. They’ve always been encouraging of “all these crazy, entrepreneurial arts initiative things I’ve been trying to do since, like, elementary school,” she said.

From stage to service “I used to say growing up that I was fluent in silence,” Luchsinger, a self-described introvert, said. It wasn’t until she started doing theater in middle school that she found her voice and discovered a passion for helping both people and communities grow through the arts. To Luchsinger, theater was a way to build confidence and spark action. Now, she hopes to spread these feelings to the world around her by incorporating her theater background into her innovative design projects. As a member of AmeriCorps for Iowa 4-H from September 2018 to August this year, Luchsinger was able to combine her arts, communication and design abilities to help plan and lead statewide workshops, events and summer camps for young students.

One such program Luchsinger worked on was the Iowa 4-H Reporters, a collaboration with Iowa Public Television and iHeartRadio during the Iowa State Fair in Des Moines. For 11 days in August, high school students interested in journalism covered activities going on throughout the fair. The best part, Luchsinger said, was watching them become more independent and gradually take more initiative to go out and get stories. Additionally, she and fellow Iowa State graduate Clark Colby (BArch 2011 Architecture & Environmental Studies / MS 2016 Architecture) ran photography workshops last spring at Iowa high schools, on campus and at professional conferences. In early March, they took a group of high school 4-Hers to Washington, DC, for the first National 4-H Youth Photography Summit. “I love working with high schoolers. I think they have a lot of incredible ideas, and they’re at a point in their life when

not something she expected going into the interdisciplinary design program, she’s grateful she found a way to pass on her love of the arts and be a mentor to others as well.

Connecting the dots The interdisciplinary design faculty pushed Luchsinger to make her projects both applicable and impactful, Luchsinger said. Along with being a mentor, Luchsinger has also used her interdisciplinary design experience to form business models. Back in March, Luchsinger was a runnerup in the Iowa State Innovation Pitch-Off for her Acoustic Paintbrush Productions project. The original pitch idea came from a fall 2018 class Luchsinger took in which she was challenged to create a way to bring more people to Ames parks. Drawing again from her theater roots, Luchsinger decided to stage Harry Nilsson’s 1970 album “The Point!” in a park. “So I had this studio project that I loved doing. Then I thought, how can

“I want to continue using the arts to build communities through Acoustic Paintbrush Productions. In, like, two years I would love to have established that in a few different parts of Iowa and get other people involved,” she said. Luchsinger recently became a project coordinator with the web design company Saltech Systems. Using her interdisciplinary design knowledge, she is eager to help create a powerful and authentic brand presence for the company and build strong relationships between its designers and clients. “My biggest goal is that I can continue to learn and grow from any opportunity or situation,” Luchsinger said. She often calls interdisciplinary design a “choose your own adventure” degree, because there are so many ways to apply her skills and always more to explore. Luchsinger finishes her cappuccino and pauses. “I also have a banjo,” she said, laughing. “I got it for Christmas last year and I’ve been trying to learn to play it!” Who says the adventure ends when you graduate? 5 College of Design Inspire Newsletter, published twice per year and mailed to more than 17,000 alumni and friends.

College of Design Inspire Newsletter, published twice per year and mailed to more than 17,000 alumni and friends.