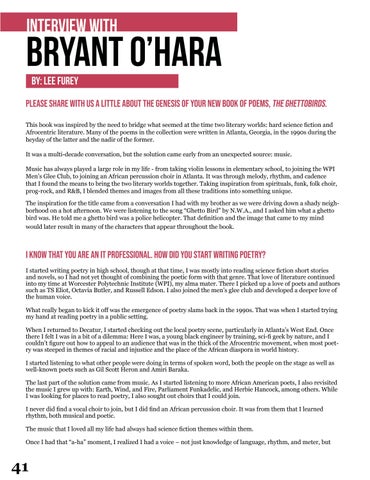 bryant o’Hara By: lee furey 1) Please share with us a little about the genesis of your new book of poems, The GhettoBirds. This book was inspired by the need to bridge what seemed at the time two literary worlds: hard science fiction and Afrocentric literature. Many of the poems in the collection were written in Atlanta, Georgia, in the 1990s during the heyday of the latter and the nadir of the former. It was a multi-decade conversation, but the solution came early from an unexpected source: music. Music has always played a large role in my life - from taking violin lessons in elementary school, to joining the WPI Men’s Glee Club, to joining an African percussion choir in Atlanta. It was through melody, rhythm, and cadence that I found the means to bring the two literary worlds together. Taking inspiration from spirituals, funk, folk choir, prog-rock, and R&amp;B, I blended themes and images from all these traditions into something unique. The inspiration for the title came from a conversation I had with my brother as we were driving down a shady neighborhood on a hot afternoon. We were listening to the song “Ghetto Bird” by N.W.A., and I asked him what a ghetto bird was. He told me a ghetto bird was a police helicopter. That definition and the image that came to my mind would later result in many of the characters that appear throughout the book.

1) I know that you are an IT professional. How did you start writing poetry? I started writing poetry in high school, though at that time, I was mostly into reading science fiction short stories and novels, so I had not yet thought of combining the poetic form with that genre. That love of literature continued into my time at Worcester Polytechnic Institute (WPI), my alma mater. There I picked up a love of poets and authors such as TS Eliot, Octavia Butler, and Russell Edson. I also joined the men’s glee club and developed a deeper love of the human voice. What really began to kick it off was the emergence of poetry slams back in the 1990s. That was when I started trying my hand at reading poetry in a public setting. When I returned to Decatur, I started checking out the local poetry scene, particularly in Atlanta’s West End. Once there I felt I was in a bit of a dilemma: Here I was, a young black engineer by training, sci-fi geek by nature, and I couldn’t figure out how to appeal to an audience that was in the thick of the Afrocentric movement, when most poetry was steeped in themes of racial and injustice and the place of the African diaspora in world history. I started listening to what other people were doing in terms of spoken word, both the people on the stage as well as well-known poets such as Gil Scott Heron and Amiri Baraka. The last part of the solution came from music. As I started listening to more African American poets, I also revisited the music I grew up with: Earth, Wind, and Fire, Parliament Funkadelic, and Herbie Hancock, among others. While I was looking for places to read poetry, I also sought out choirs that I could join. I never did find a vocal choir to join, but I did find an African percussion choir. It was from them that I learned rhythm, both musical and poetic. The music that I loved all my life had always had science fiction themes within them.

Once I had that “a-ha” moment, I realized I had a voice – not just knowledge of language, rhythm, and meter, but 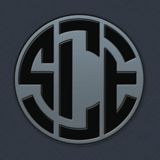