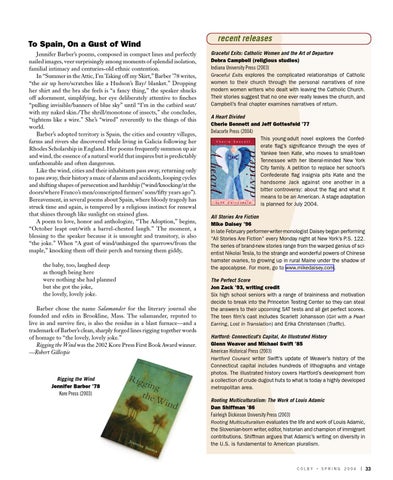 To Spain, On a Gust of Wind Jennifer Barber’s poems, composed in compact lines and perfectly nailed images, veer surprisingly among moments of splendid isolation, familial intimacy and centuries-old ethnic contention. In “Summer in the Attic, I’m Taking off my Skirt,” Barber ’78 writes, “the air up here/scratches like a Hudson’s Bay/ blanket.” Dropping her shirt and the bra she feels is “a fancy thing,” the speaker shucks off adornment, simplifying, her eye deliberately attentive to finches “pulling invisible/banners of blue sky” until “I’m in the catbird seat/ with my naked skin./The shrill/monotone of insects,” she concludes, “tightens like a wire.” She’s “wired” reverently to the things of this world. Barber’s adopted territory is Spain, the cities and country villages, farms and rivers she discovered while living in Galicia following her Rhodes Scholarship in England. Her poems frequently summon up air and wind, the essence of a natural world that inspires but is predictably unfathomable and often dangerous. Like the wind, cities and their inhabitants pass away, returning only to pass away, their history a maze of alarms and accidents, looping cycles and shifting shapes of persecution and hardship (“wind/knocking/at the doors/where Franco’s men/conscripted farmers’ sons/fifty years ago”). Bereavement, in several poems about Spain, where bloody tragedy has struck time and again, is tempered by a religious instinct for renewal that shines through like sunlight on stained glass. A poem to love, honor and anthologize, “The Adoption,” begins, “October leapt out/with a barrel-chested laugh.” The moment, a blessing to the speaker because it is unsought and transitory, is also “the joke.” When “A gust of wind/unhinged the sparrows/from the maple,” knocking them off their perch and turning them giddy, the baby, too, laughed deep as though being here were nothing she had planned but she got the joke, the lovely, lovely joke. Barber chose the name Salamander for the literary journal she founded and edits in Brookline, Mass. The salamander, reputed to live in and survive fire, is also the residue in a blast furnace—and a trademark of Barber’s clean, sharply forged lines rigging together words of homage to “the lovely, lovely joke.” Rigging the Wind was the 2002 Kore Press First Book Award winner. —Robert Gillespie

recent releases Graceful Exits: Catholic Women and the Art of Departure Debra Campbell (religious studies) Indiana University Press (2003) Graceful Exits explores the complicated relationships of Catholic women to their church through the personal narratives of nine modern women writers who dealt with leaving the Catholic Church. Their stories suggest that no one ever really leaves the church, and Campbell’s final chapter examines narratives of return. A Heart Divided Cherie Bennett and Jeff Gottesfeld ’77 Delacorte Press (2004) This young-adult novel explores the Confederate flag’s significance through the eyes of Yankee teen Kate, who moves to small-town Tennessee with her liberal-minded New York City family. A petition to replace her school’s Confederate flag insignia pits Kate and the handsome Jack against one another in a bitter controversy: about the flag and what it means to be an American. A stage adaptation is planned for July 2004. All Stories Are Fiction Mike Daisey ’96 In late February performer-writer-monologist Daisey began performing “All Stories Are Fiction” every Monday night at New York’s P.S. 122. The series of brand-new stories range from the warped genius of scientist Nikolai Tesla, to the strange and wonderful powers of Chinese hamster ovaries, to growing up in rural Maine under the shadow of the apocalypse. For more, go to www.mikedaisey.com. The Perfect Score Jon Zack ’93, writing credit Six high school seniors with a range of braininess and motivation decide to break into the Princeton Testing Center so they can steal the answers to their upcoming SAT tests and all get perfect scores. The teen film’s cast includes Scarlett Johansson (Girl with a Pearl Earring, Lost in Translation) and Erika Christensen (Traffic). Hartford: Connecticut’s Capital, An Illustrated History Glenn Weaver and Michael Swift ’85 American Historical Press (2003) Hartford Courant writer Swift’s update of Weaver’s history of the Connecticut capital includes hundreds of lithographs and vintage photos. The illustrated history covers Hartford’s development from a collection of crude dugout huts to what is today a highly developed metropolitan area. Rooting Multiculturalism: The Work of Louis Adamic Dan Shiffman ’86 Fairleigh Dickinson University Press (2003) Rooting Multiculturalism evaluates the life and work of Louis Adamic, the Slovenian-born writer, editor, historian and champion of immigrant contributions. Shiffman argues that Adamic’s writing on diversity in the U.S. is fundamental to American pluralism. 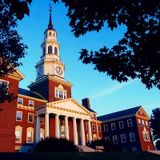