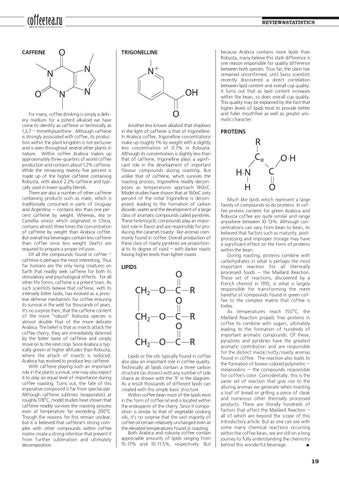 For many, coffee drinking is simply a delivery medium for a potent alkaloid we have come to identify as caffeine or technically as 1,3,7 – trimethylxanthine. Although caffeine is strongly associated with coffee, its production within the plant kingdom is not exclusive and is seen throughout several other plants in nature. Within coffee Arabica makes up approximately three-quarters of world coffee production and contains about 1.2% caffeine. While the remaining twenty-five percent is made up of the higher caffeine containing Robusta, with about 2.2% caffeine and typically used in lower quality blends. There are also a number of other caffeine containing products such as mate, which is traditionally consumed in parts of Uruguay and Argentina — contains less than one percent caffeine by weight. Whereas, tea or Camellia sinesis which originated in China, contains almost three times the concentration of caffeine by weight than Arabica coffee. But overall tea beverages contain less caffeine than coffee since less weight (leafs) are required to prepare a proper infusion. Of all the compounds found in coffee – caffeine is perhaps the most interesting. Thus far humans are the only living creatures on Earth that readily seek caffeine for both its stimulatory and psychological effects. For all other life forms, caffeine is a potent toxin. As such scientists believe that caffeine, with its intensely bitter taste, has evolved as a primitive defense mechanism for coffee ensuring its survival in the wild for thousands of years. It’s no surprise then, that the caffeine content of the more “robust” Robusta species is almost double that of the more delicate Arabica. The belief is that as insects attack the coffee cherry, they are immediately deterred by the bitter taste of caffeine and simply move on to the next crop. Since Arabica is typically grown at higher altitudes than Robusta, where the attack of insects is reduced, Arabica has evolved to produce less caffeine. With caffeine playing such an important role in the plants survival, one may also expect it to play an equal level of importance during coffee roasting. Turns out, the fate of this imperative compound is far from spectacular. Although caffeine sublimes (evaporates) at o roughly 178 C, model studies have shown that caffeine readily survives the roasting process o even at temperature far exceeding 200 C. Though the reasons for this remain unclear, but it is believed that caffeine’s strong complex with other compounds within coffee matrix create a strong retention that prevent it from further sublimation and ultimately decomposition.

Another less known alkaloid that shadows in the light of caffeine is that of trigonelline. In Arabica coffee, trigonelline concentrations make up roughly 1% by weight with a slightly less concentration of 0.7% in Robusta. Although its concentration is slightly less than that of caffeine, trigonelline plays a significant role in the development of important flavour compounds during roasting. But unlike that of caffeine, which survives the roasting process, trigonelline readily decomposes as temperatures approach 160oC. Model studies have shown that at 160oC sixty percent of the initial trigonelline is decomposed, leading to the formation of carbon dioxide, water and the development of a large class of aromatic compounds called pyridines. These heterocyclic compounds play an important role in flavor and are responsible for producing the caramel/roasty- like aromas commonly found in coffee. Overall production of these class of roasty pyridines are proportional to its degree of roast – with darker roasts having higher levels than lighter roasts.

Lipids or the oils typically found in coffee also play an important role in coffee quality. Technically all lipids contain a three carbon structure (as shown) with any number of side chains as shown with the ‘R’ in the diagram. As a result thousands of different lipids can created with this simple basic structure. Within coffee bean most of the lipids exist in the form of coffee oil and is located within the endosperm of the cherry. Since it composition is similar to that of vegetable cooking oils, it’s no surprise that the vast majority of coffee oil remain relatively unchanged even at the elevated temperatures found in roasting. Both Arabica and robusta coffee contain appreciable amounts of lipids ranging from 15-17% and 10-11.5%, respectively. But

because Arabica contains more lipids than Robusta, many believe this stark difference is one reason responsible for quality difference between both species. Thus far, the claim has remained unconfirmed, until Swiss scientists recently discovered a direct correlation between lipid content and overall cup quality. It turns out that as lipid content increases within the bean, so does overall cup quality. This quality may be explained by the fact that higher levels of lipids tend to provide better and fuller mouthfeel as well as greater aromatic character.

Much like lipids which represent a large family of compounds so do proteins. In coffee protein content for green Arabica and Robusta coffee are quite similar and range anywhere between 10-13%. Although concentrations can vary from bean to bean, its believed that factors such as maturity, postprocessing and improper storage may have a significant effect on the form of proteins within the bean. During roasting, proteins combine with carbohydrates in what is perhaps the most important reaction for all thermally processed foods — the Maillard Reaction. These set of reactions, discovered by a French chemist in 1910, is what is largely responsible for transforming the mere handful of compounds found in green coffee to the complex matrix that coffee is today. o As temperatures reach 150 C, the Maillard Reaction propels free proteins in coffee to combine with sugars, ultimately leading to the formation of hundreds of important aromatic compounds. Of these, pyrazines and pyridines have the greatest aromatic contribution and are responsible for the distinct maize/nutty/roasty aromas found in coffee. The reaction also leads to the formation of brown-colored polymetric — melanoidins — the compounds responsible for coffee’s color. Coincidentally, this is the same set of reaction that give rise to the alluring aromas we generate when toasting a loaf of bread or grilling a piece of steak and numerous other thermally processed products. There are literally hundreds of factors that affect the Maillard Reaction – all of which are beyond the scope of this introductory article. But as one can see with some many chemical reactions occurring within the coffee bean, we are still on a long journey to fully understanding the chemistry behind this wonderful beverage.