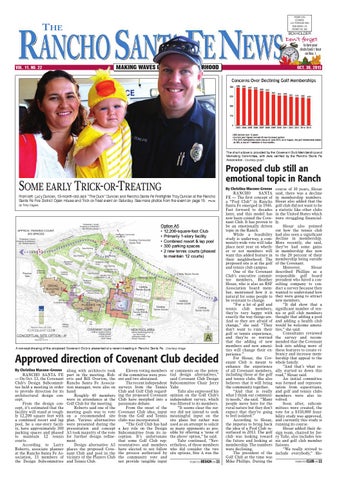 to turn your clocks back 1 hour on Nov. 1

The chart above is provided by the Covenant Club Membership and Marketing Committee, with data verified by the Rancho Santa Fe Association. Courtesy graph

A concept drawing of the proposed Covenant Club is presented at a recent meeting in Rancho Santa Fe. Courtesy image

RANCHO SANTA FE — On Oct. 13, the Covenant Club’s Design Subcommittee held a meeting in order to provide direction for its architectural design concept. From the design concept, it’s estimated that the facility will stand at roughly 12,200 square feet with a combined resort and lap pool, be a one-story facility, have approximately 300 parking spaces and phased to maintain 12 tennis courts. According to Larry Roberts, associate planner at the Rancho Santa Fe Association, 13 members of the Design Subcommittee

along with architects took part in the meeting. Roberts and Bill Overton, the Rancho Santa Fe Association manager, were also on hand. Roughly 40 members were in attendance at the Golf Club for the meeting. Roberts said one of the meeting goals was to vote on a recommended site plan. Various alternatives were presented during the presentation and concept A5 took majority of the vote for further design refinement. Design alternative A5 places the proposed Covenant Club and pool in the vicinity of the Players Club and Tennis Club.

Eleven voting members of the committee were present and two abstained. The recent independent surveys from the Tennis Club and Golf Club regarding the proposed Covenant Club have morphed into a passionate debate. From the onset of the Covenant Club idea, input from the Golf and Tennis clubs was incorporated. “The Golf Club has had a key role on the Design Subcommittee from its inception. It’s unfortunate that some Golf Club representatives and members have elected to not follow the process authorized by the community vote and not provide tangible input

or comments on the potential design alternatives,” said Covenant Club Design Subcommittee Chair Jerry Yahr. Yahr also expressed his opinion on the Golf Club’s independent survey, which was filtered to its members. “It seems clear the survey did not intend to seek meaningful input on the site plans but rather was used as an attempt to solicit as many opponents as possible by offering a ‘none of the above’ option,” he said. Yahr continued, “Nevertheless, of those members who did consider the two site options, Site A was the TURN TO DESIGN ON 22

RANCHO SANTA FE — The first concept of a “Pool Club” in Rancho Santa Fe emerged in 1946. Fast forward to decades later, and this model has now been coined the Covenant Club. It has proven to be an emotionally driven topic in the Ranch. While a feasibility study is underway, a community-wide vote will take place next year on whether or not members will want this added feature in their neighborhood. The proposed site is at the golf and tennis club campus. One of the Covenant Club’s executive committee members, Heather Slosar, who is also an RSF Association board member, mentioned how it is natural for some people to be resistant to change. “For a lot of golf and tennis club members, they’re very happy with exactly the way things are. And so they are afraid of change,” she said. “They don’t want to ruin their golf or tennis experience, and they’re so worried that the adding of new members and new amenities will change their experience.” For Slosar, the Covenant Club is meant to enhance the experience of all Covenant members, including those at the golf and tennis clubs. She also believes that it will bring the community together. “And that is really what I think our community needs,” she said. “Many people move here for the rural nature but they don’t expect that they’re going to feel isolated.” According to Slosar, the impetus to bring back the idea of a Pool Club resurfaced in 2013. The golf club was looking toward the future and looking at membership. The numbers were declining. The president of the Golf Club at the time was Mike Phillips. During the

said, there was a decline in membership numbers. Slosar also added that the golf club did not want to be a statistic like other clubs in the United States which were struggling financially. Slosar also pointed out how the tennis club had also seen a significant decline in membership. More recently, she said, they’ve had some gains in membership due now to the 20 percent of their membership being outside of the Covenant. Moreover, Slosar described Phillips as a responsible golf board president who hired a consulting company to conduct a survey because they wanted to understand how they were going to attract new members. “It did show that a significant number of tennis or golf club members thought that adding a pool and adding a health club would be welcome amenities,” she said. Consultants reviewed the survey and recommended that the Covenant look into adding more of these features to create vibrancy and increase membership that appeal to the whole family. “And that’s what really started us down this road,” Slosar said. An initial committee was formed and representation from equestrians, and golf and tennis clubs members were also involved. Soon after, subcommittees were created, the vote for a $350,000 feasibility study was approved, and currently this study is running its course. Slosar added their design team, chaired by Jerry Yahr, also includes tennis and golf club member liaisons. “We really strived to include everybody,” SloTURN TO CLUB ON 22