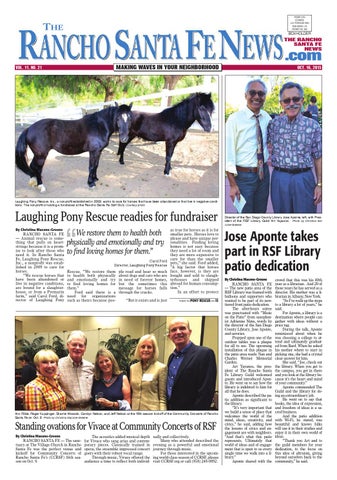 Laughing Pony Rescue, Inc., a nonprofit established in 2009, works to care for horses that have been abandoned or that live in negative conditions. The nonprofit is hosting a fundraiser at the Rancho Santa Fe Golf Club. Courtesy photo

RANCHO SANTA FE — Animal rescue is something that pulls on heartstrings because it is a promise to look after those who need it. In Rancho Santa Fe, Laughing Pony Rescue, Inc., a nonprofit was established in 2009 to care for horses. “We rescue horses that have been abandoned or live in negative conditions, are bound for a slaughterhouse, or from a Premarin farm,” said Carol Ford, director of Laughing Pony

ple read and hear so much about dogs and cats who are in need of forever homes, but the sometimes this message for horses falls through the cracks.

as true for horses as it is for smaller pets. Horses love to please and have unique personalities. Finding loving homes is not easy because they need a lot of room and they are more expensive to care for than the smaller pets,” she said. Ford added, “A big factor that horses face, however, is they are bought and sold to slaughterhouses and shipped abroad for human consumption.” In an effort to protect

“But it exists and is just

TURN TO PONY RESCUE ON 15

We restore them to health both physically and emotionally and try to find loving homes for them.” Carol Ford Director, Laughing Pony Rescue

Rescue. “We restore them to health both physically and emotionally and try to find loving homes for them.” Ford said there is a need for organizations such as theirs because peo-

RANCHO SANTA FE — The sanctuary at The Village Church in Rancho Santa Fe was the perfect venue and kickoff for Community Concerts of Rancho Santa Fe’s (CCRSF) 16th season on Oct. 9.

The acoustics added musical depth for Vivace who sang arias and contemporary pieces. Classically trained in opera, the ensemble impressed concert goers with their robust vocal range. Through music, Vivace offered the audience a time to reflect both individ-

ually and collectively. Many who attended described the evening as a powerful and emotional journey through music. For those interested in the upcoming world-class season of CCRSF, please visit CCRSF.org or call (858) 248-0892.

RANCHO SANTA FE — The new patio area of the RSF Library was framed with balloons and supporters who wanted to be part of its newtiered front patio dedication. The after-hours soiree was punctuated with “Music on the Patio” from saxophonist Adrienne Nims, words by the director of the San Diego County Library, Jose Aponte, and savories. Propped upon one of the outdoor tables was a plaque for all to see. The upcoming installation of this plaque in the patio area reads: Nan and Charles Werner Memorial Garden. Art Yayanos, the president of The Rancho Santa Fe Library Guild welcomed guests and introduced Aponte. He went on to say how the library is indebted to him for all that he does. Aponte described the patio addition as significant to the library. “It’s very important that we build a sense of place that welcomes the world of the mind, ideas, creativity, and civics,” he said, adding how the lessons of civics and engagement are with neighbors. “And that’s what this patio represents. Ultimately that world of ideas and of engagement that is open to us every single time we walk into a library.” Aponte shared with the

crowd that this was his 40th year as a librarian. And 20 of those years he has served as a director. His mother was a librarian in Albany, New York. “So I’ve walk up the steps to a library a lot of years,” he said. For Aponte, a library is a destination where people can gather with ideas without a price tag. During the talk, Aponte reminisced about when he was choosing a college to attend and ultimately graduated from Bard. When he asked his mother where to start in picking one, she had a crystal clear answer for him. She said, “Joe, check out the library. When you get to the campus, you get in there and you look at the library because it’s the heart and mind of your community.” Aponte commended The Guild and the library for doing an extraordinary job. He went on to say that books, the idea of expression, and freedom of ideas is a sacred business. And the patio addition with Wi-Fi, he stated, was beautiful and knows folks will use it in their studies and enjoy it in their own world of ideas. “Thank you Art and to the guild members for your dedication, to the focus on this idea of altruism, giving beyond ourselves back to the community,” he said.