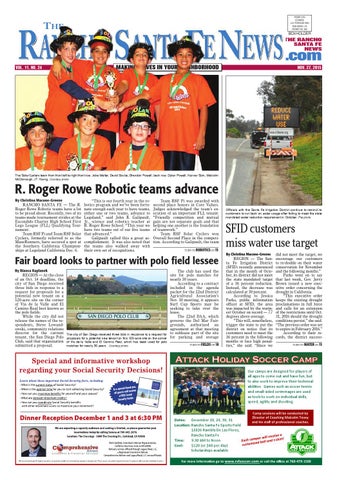 RANCHO SANTA FE — The R. Roger Rowe Robotic teams have a lot to be proud about. Recently, two of its teams made tournament strides at the Escondido Charter High School First Lego League (FLL) Qualifying Tournament. Team RSF Pi and Team RSF Solar Cyclers, formerly referred to as the MazeRunners, have secured a spot at the Southern California Championships at Legoland California Dec. 6.

“This is our fourth year in the robotics program and we’ve been fortunate enough each year to have teams, either one or two teams, advance to Legoland,” said John B. Galipault, Jr., science and robotics teacher at R. Roger Rowe School. “This year we have two teams out of our five teams that advanced.” Galipault called this a great accomplishment. It was also noted that the teams also walked away with their own set of recognitions.

Team RSF Pi was awarded with second place honors in Core Values. Judges acknowledged the team’s execution of an important FLL tenant: “Friendly competition and mutual gain are not separate goals and that helping one another is the foundation of teamwork.” Team RSF Solar Cyclers won Overall Second Place in the competition. According to Galipault, the team TURN TO ROBOTICS ON 15

REGION — At the close of an Oct. 14 deadline, the city of San Diego received three bids in response to a request for proposals for a potential new tenant on a 120-acre site on the corner of Via de la Valle and El Camino Real best known as the polo fields. While the city did not release the names of the respondents, Steve Lewandowski, community relations director for the current tenant, the San Diego Polo Club, said that organization submitted a proposal.

The club has used the site for polo matches for nearly 30 years. According to a contract included in the agenda packet for the 22nd District Agricultural Association’s Nov. 10 meeting, it appears Surf Cup Sports may be seeking to take over the lease. The 22nd DAA, which governs the Del Mar Fairgrounds, authorized an agreement at that meeting The city of San Diego received three bids in response to a request for to sublease part of the site proposals for a potential new tenant on this 120-acre site on the corner for parking and storage of Via de la Valle and El Camino Real, which has been used for polo matches for nearly 30 years. Courtesy photo

TURN TO FIELDS ON 18

Officials with the Santa Fe Irrigation District continue to remind its customers to cut back on water usage after failing to meet the state mandated water reduction requirement in October. File photo

REGION — The Santa Fe Irrigation District (SFID) recently announced that in the month of October, its district did not meet the state mandated target of a 36 percent reduction. Instead, the decrease was calculated at 30 percent. According to Jessica Parks, public information officer at SFID, the area was impacted by the warmest October on record — 7.7 degrees above average. “This will, nonetheless, trigger the state to put the district on notice that its customers need to meet the 36 percent in the following months or face high penalties,” she said. “Since we

did not meet the target, we encourage our customers to re-double on their water conservation for November and the following months.” Parks went on to say that last week, Gov. Jerry Brown issued a new executive order concerning the drought in California. “This executive order keeps the existing drought proclamations in full force and calls for an extension of the restrictions until Oct. 31, 2016 should the drought conditions persist,” she said. “The previous order was set to expire in February 2016.” According to their records, the district successTURN TO WATER ON 15

Our camps are designed for players of all ages to come out and have fun, but to also work to improve their technical abilities. Games such as soccer tennis and small-sided scrimmages are used as tools to work on individual skills, speed, agility and shooting.

Camp sessions will be conducted by Director of Coaching Malcolm Tovey and his staff of professional coaches.