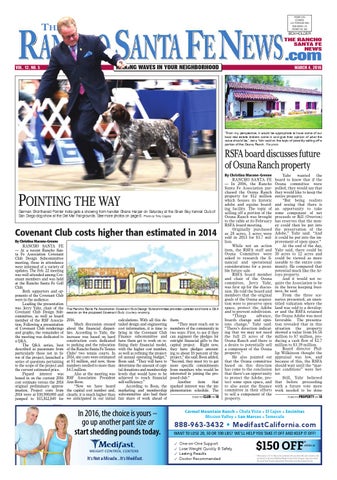 “From my perspective, it would be appropriate to have some of our local real estate brokers come in and give their opinion of what the value should be,” Jerry Yahr said on the topic of possibly selling off a portion of the Osuna Ranch. File photo

RANCHO SANTA FE — At a recent Rancho Santa Fe Association Covenant Club Design Subcommittee meeting, those in attendance were informed of a variety of updates. The Feb. 22 meeting was well attended among Covenant members and was held at the Rancho Santa Fe Golf Club. Both supporters and opponents of the Covenant Club were in the audience. Leading the presentation was Jerry Yahr, chair of the Covenant Club Design Subcommittee, as well as board member of the RSF Association. Following a presentation of Covenant Club renderings and graphs, the remainder of the meeting was dedicated to a Q&amp;A. The Q&amp;A series, best described as passionate from particularly those not in favor of the project, launched a series of questions pertaining to the scope of the project and the current estimated price. Piqued interest was honed in on the current 2016 cost estimate versus the 2014 original preliminary approximation. Project costs from 2014 were at $10,900,000 and jumped to $15,812,849 for

2016. Much discussion ensued about the financial disparities. According to Yahr, the increase was based on hard construction costs dedicated to parking and the relocation of the Rancho Santa Fe Tennis Clubs’ two tennis courts. In 2014, site costs were estimated at $1 million, and now, those numbers swelled to more than $4.5 million. Also at the meeting was RSF Association President Ann Boon. “Now we have heard the capital cost number and, clearly, it is much higher than we anticipated in our initial

calculations. With all this detailed design and engineering cost information, it is time to bring in the Covenant Club Finance subcommittee and have them get to work on refining their financial model, with the higher cost number, as well as refining the projected annual operating budget,” Boon said. “They will have to determine the amount of capital donations and membership levels that would have to be achieved to reach financial self-sufficiency.” According to Boon, the marketing and membership subcommittee also had their fair share of work ahead of

them. “They must reach out to members of the community in two ways: First, to see if they can augment the pledges for outright financial gifts to the capital project. Right now, they have pledges amounting to about 10 percent of the project,” she said. Boon added, “Second, they must try to get more specific commitments from members who would be interested in joining the proposed club.” Another item that sparked interest was the implementation schedule. The TURN TO CLUB ON 18

RANCHO SANTA FE — In 2006, the Rancho Santa Fe Association purchased the Osuna Ranch property for $12 million which houses its historic adobe and equine boarding facility. The topic of selling off a portion of the Osuna Ranch was brought to the table at its February RSFA board meeting. Originally purchased as 28 acres, 3 acres were sold in 2013 for $1.7 million. While not an action item, the RSFA staff and Osuna Committee were asked to research the financial and operational considerations for a possible future sale. RSFA board member and chair of the Osuna committee, Jerry Yahr, was first up for the discussion. He told the board and members that the original goals of the Osuna acquisition were to preserve open space, protect the Adobe and to prevent subdivision. “Things advance, boards change and opinions change,” Yahr said. “There’s direction indicating that we may not need the full 25 acres of the Osuna Ranch and there is a desire to potentially sell a component of the Osuna property.” He also pointed out that the Osuna committee based on this direction has come to the conclusion that there’s an opportunity to protect the Adobe, protect some open space, and to also assist the finance committee in their efforts to sell a component of the property.

Yahr wanted the board to know that if the Osuna committee were polled, they would say that they would like to keep the entire property. “But being realists and seeing that there is an opportunity to take some component of net proceeds or Bill (Overton) has reserves that the money could then be put into the preservation of the Adobe,” Yahr said. “And it could be put into the improvement of open space.” At the end of the day, Yahr said, there could be 10 acres to 12 acres and could be viewed as more useable to the entire community. He compared that potential much like the Arroyo property. And it would not require the Association to be in the horse keeping business, he said. From the three scenarios presented, an unentitled valuation where the land was sold to a developer and the RSFA retained the Osuna Adobe was most favorable. The presentation revealed that in this situation the property showed a value from $6.56 million to $7 million, producing a cash flow of $2.7 million to $3.39 million. Board director Phillip Wilkinson thought the appraisal was low, and because of this, the RSFA should wait until the “market conditions” were better. Still, Yahr believed that before proceeding with a future vote more work needed to be done TURN TO PROPERTY ON 18