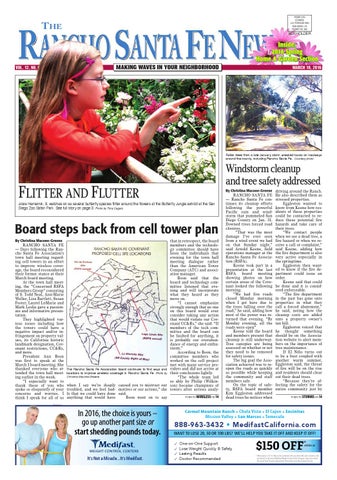 Fallen trees from a late January storm wreaked havoc on roadways around the county, including Rancho Santa Fe. Courtesy photo

By Christina Macone-Greene driving around the Ranch.

Josie Hamernik, 9, watches on as several butterfly species flitter around the flowers at the Butterfly Jungle exhibit at the San Diego Zoo Safari Park. See full story on page 3. Photo by Tony Cagala

Board steps back from cell tower plan By Christina Macone-Greene

RANCHO SANTA FE — Days following the Rancho Santa Fe Association’s town hall meeting regarding cell towers in an effort to improve wireless coverage, the board reconsidered their former stance at their March board meeting. At the town hall meeting, the “Concerned RSFA Members Group” consisting of S. Todd Neal, Ann-Marie Weller, Lisa Bartlett, Susan Foster, Laurel LeMarie and Mark Leslie gave a passionate and informative presentation. They highlighted various issues including how the towers could have a negative impact and/or infringement on property values, its California historic landmark designation, Covenant restrictions, CC&amp;Rs, and more. President Ann Boon was first to speak at the March 3 board meeting. She thanked everyone who attended the town hall meeting earlier in the week. “I especially want to thank those of you who spoke so eloquently of your concerns and worries. I think I speak for all of us

that in retrospect, the board members and the technology committee should have been the individuals that evening for the town hall meeting dialogue rather than the American Tower Company (ATC) and association manager. Boon said that the board and technology committee listened that evening and will incorporate what they heard as they move on. “I cannot emphasize strongly enough that no one on this board would ever consider taking any action that would violate our Covenant CC&amp;Rs,” she said. “If members of the tech committee and the board can be faulted for anything, it is probably our overabundance of energy and enthusiasm.” According to Boon, the committee members who worked on the cell project met with many service proThe Rancho Santa Fe Association board continues to find ways and viders and did not arrive at locations to improve wireless coverage in Rancho Santa Fe. Photo by their conclusions lightly. Christina Macone-Greene “The whole team led so ably by Philip (Wilkinwhen I say we’re deeply caused you to mistrust our son) became champions of troubled, and we feel bad- motives or our actions,” she towers after serious analyly that we could have done said. TURN TO WIRELESS ON 14 Boon went on to say anything that would have

RANCHO SANTA FE — Rancho Santa Fe continues its cleanup efforts following the powerful Pacific rain and windstorm that pummeled San Diego County on Jan. 31. Downed trees forced road closures. “That was the most damage I’ve ever seen from a wind event we had on that Sunday night,” said Arnold Keene, field operations manager at the Rancho Santa Fe Association (RSFA). Keene took part in a presentation at the last RSFA board meeting showing photos on how certain areas of the Covenant looked the following morning. “We had five roads closed Monday morning when I got here due to the trees falling over the road,” he said, adding how most of the power was returned that evening. “By Monday evening, all the roads were open” Keene told the board and members present that cleanup is still underway. Tree canopies are being assessed on whether or not they need to be removed for safety issues. The big goal the Association achieved was to reopen the roads as quickly as possible while keeping the community and staff members safe. On the topic of safety, RSFA board member Kim Eggleston addressed dead trees he notices when

He also described them as stressed properties. Eggleston wanted to know from Keene how residents of these properties could be contacted to reduce these potential fire hazards and take care of their trees. “We contact people when we see a dead tree, a fire hazard or when we receive a call or complaint,” said Keene, adding how the fire department is also very active especially in the springtime. Eggleston then wanted to know if the fire department could issue an order. Keene said that could be done and it is considered enforceable. “The fire department in the past has gone onto properties in what they call a forced abatement,” he said, noting how the cleanup costs are added onto a property owner’s tax bill. Eggleston voiced that he thought something should be on the Association website to alert members on the importance of tree maintenance. If El Niño turns out to be a bust coupled with another warm summer, Eggleston said, the threat of fire will be on the rise and residents should clear out their dead trees. “Because they’re affecting the safety for the entire community just by TURN TO STORMS ON 14