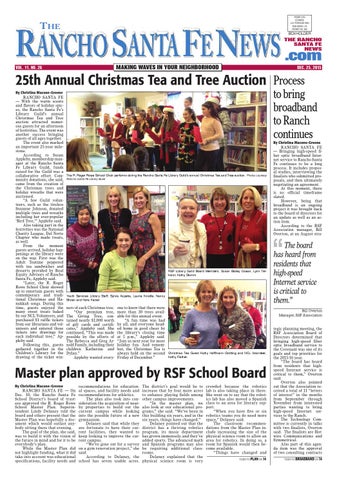 to bring broadband to Ranch continues

RANCHO SANTA FE — With the warm scents and flavors of holiday spices, the Rancho Santa Fe’s Library Guild’s annual Christmas Tea and Tree auction attracted numerous guests for an afternoon of festivities. The event was another success bringing guests of all ages together. The event also marked an important 25-year milestone. According to Susan Appleby, membership manager at the Rancho Santa Fe Library Guild, funds raised for the Guild was a collaborative effort. Community donations, she said, came from the creation of the Christmas trees and holiday wreaths that were auctioned. “A few Guild volunteers, such as the tireless Suzanne Johnson, donated multiple trees and wreaths including her ever-popular ‘Bird Tree,’” Appleby said. Also taking part in the festivities was the National Charity League, Del Norte Chapter who made treats, as well. From the moment guests arrived, holiday happenings at the library were on the way. First was the Adult Teatime peppered with tea sandwiches and desserts provided by Real Equity Advisors of Rancho Santa Fe, Appleby said. “Later, the R. Roger Rowe School Choir showed up to entertain guests with contemporary and traditional Christmas and Hanukkah songs. During this time, guests enjoyed the many sweet treats baked by our NCL Volunteers, and purchased $1 raffle tickets from our librarians and volunteers and entered those tickets into drawings for each individual tree,” Appleby said. Following this, guests gathered together in the Children’s Library for the drawing of the ticket win-

ners of each Christmas tree. “Our premium tree, The Giving Tree, contained nearly $1,000 worth of gift cards and certificates,” Appleby said. She continued, “This was made possible by the efforts of The Rebecca and Greg Arnold Family, including their children Katherine and Dylan.” Appleby wanted every-

one to know that there were more than 30 trees available for this annual event. “A fun time was had by all, and everyone headed home in good cheer by the library’s closing time at 5 p.m.,” Appleby said. “Join us next year for more holiday fun. And remember, the Christmas Tea is always held on the second Christmas Tea Guest Kathy Hoffmann-Grotting and NCL Volunteer, Kathy Flather. Friday of December.”

RANCHO SANTA FE — On Dec. 10, the Rancho Santa Fe School District’s board of trustees approved the R. Roger Rowe School Master Plan. Superintendent Lindy Delaney told the board and others present that the Master Plan was hopefully a document which would outlast anybody sitting there that evening. The goal of the plan, she said, was to build it with the vision of the future in mind and for it to be everybody’s plan. While the Master Plan did not highlight funding, what it did take into account was educational specifications, facility needs and

recommendations for educational spaces, and facility needs and recommendations for athletics. The plan also took into consideration the acquisition of nearby properties to build out the current campus while looking into the possible future of a new gymnasium. Delaney said that while they are fortunate to have their current facilities, they wanted to keep looking to improve the current campus. “We’ve gone out for a survey on a gym renovation project,” she said. According to Delaney, the school has seven usable acres.

The district’s goal would be to increase that by four more acres to enhance playing fields among other campus improvements. “In the master plan, we also look at our educational programs,” she said. “We’ve been in this building six years, and in the six years, things have changed.” Delaney pointed out that the district has a thriving robotics program, its music department has grown immensely, and they’ve added sports. The advanced math and Spanish programs may also be requiring additional classrooms. Delaney explained that the physical science room is very

The board has heard from residents that high-speed Internet service is critical to them.” Bill Overton Manager, RSF Association

crowded because the robotics lab is also taking place in there. She went on to say that the robotics lab has also moved a Spanish class to an area for literary support. “When you have five or six robotics teams you do need more space,” Delaney said. The classroom recommendations from the Master Plan include increasing the size of the physical science room to allow an area for robotics. In doing so, a room for Spanish would then become available. “Things have changed and

tegic planning meeting, the RSF Association Board of Directors determined that bringing high-speed fiber optic broadband service to the Covenant was one of its goals and top priorities for the 2015-16 year. “The board has heard from residents that highspeed Internet service is critical to them,” Overton said. Overton also pointed out that the Association received a total of 11 “letters of interest” in the months from September through November from interested parties wanting to bring high-speed Internet services to the Ranch. The Technology Committee is currently in talks with two finalists, Overton said. The finalists are Hotwire Communications and Symmetrical. Also part of this agenda item was the approval of two consulting contracts

TURN TO BROADBAND ON 14

Master plan approved by RSF School Board By Christina Macone-Greene

RANCHO SANTA FE — Bringing high-speed fiber optic broadband Internet service to Rancho Santa Fe continues to be a long process. It includes proposal studies, interviewing the finalists who submitted proposals, and then ultimately negotiating an agreement. At this moment, there is no official timeframe slated. However, being that broadband is an ongoing project it was brought back to the board of directors for an update as well as an action item. According to the RSF Association manager, Bill Overton, at an August stra-