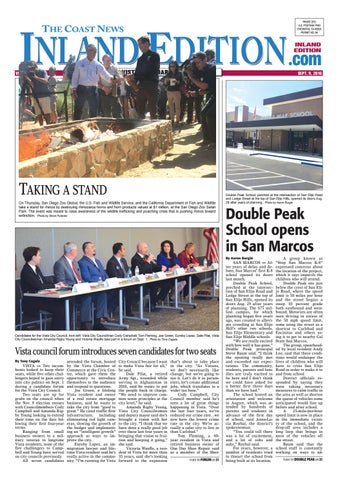 TAKING A STAND On Thursday, San Diego Zoo Global, the U.S. Fish and Wildlife Service, and the California Department of Fish and Wildlife take a stand for rhinos by destroying rhinoceros horns and horn products valued at $1 million, at the San Diego Zoo Safari Park. The event was meant to raise awareness of the wildlife trafficking and poaching crisis that is pushing rhinos toward extinction. Photo by Steve Puterski

Double Peak School, perched at the intersection of San Elijo Road and Ledge Street at the top of San Elijo Hills, opened its doors Aug. 29 after years of planning. Photo by Aaron Burgin

VISTA — Two incumbents looked to keep their seats, while five other challengers hoped to gain entry into city politics on Sept. 1 during a candidate forum for the Vista City Council. Two seats are up for grabs on the council when the Nov. 8 election ensues with Councilmembers Cody Campbell and Amanda Rigby Young looking to extend their time on the dais following their first four-year terms. Ranging from small business owners to a military veteran to longtime Vista residents, none of the five challengers to Campbell and Young have served on city councils previously. All seven candidates

attended the forum, hosted by the Vista Chamber of Commerce at the Civic Center, which gave them the opportunity to introduce themselves to the audience and respond to questions. Joe Green, a lifelong Vista resident and owner of a real estate mortgage business, said he wants to take the city from “good to great.” He cited traffic flow infrastructure, including eliminating red light cameras, slowing the growth of the budget and implementing an “intelligent growth” approach as ways to improve the city. Eureby Lopez, an immigration lawyer and lifetime Vista resident said he’s really active in the community. “I’m running for Vista

City Council because I want to make Vista fair for all,” he said. Dale Pilat, a retired Army Sgt., wounded while serving in Afghanistan in 2010, said he wants to put the people back in charge. “We need to improve common sense principles at the city level,” he said. Amanda Rigby Young, Vista City Councilwoman and deputy mayor said she’s brought a vision with her to the city. “I think that we have done a really good job over these last four years in bringing that vision to fruition and keeping it going,” she said. Victoria Waufle, a resident of Vista for more than 35 years, said she’s looking forward to the expansion

that’s about to take place in the city. “As Vistans, we don’t necessarily like change, but we’re going to see it. Let’s do it in parameters, let’s create additional jobs, which translates to a wider tax base.” Cody Campbell, City Council member said he’s seen a lot of great things happening in Vista. “Over the last four years, we’ve reduced our crime rate…we now have the lowest crime rate in the city. We’re actually a safer city to live in than Carlsbad.” Tom Fleming, a 40year resident in Vista and retired business owner of One Day Shoe Repair said as a member of the SherTURN TO FORUM ON 21

SAN MARCOS — After years of delay and debate, San Marcos’ first K-8 school opened its doors last month. Double Peak School, perched at the intersection of San Elijo Road and Ledge Street at the top of San Elijo Hills, opened its doors Aug. 29 after years of planning. The $75 million campus, for which planning began five years ago, was created to alleviate crowding at San Elijo Hill’s other two schools, San Elijo Elementary and San Elijo Middle schools. “We are really excited with how well it has gone,” Double Peak principal Steve Baum said. “I think the opening really met and exceeded our expectations. The community, students, parents and families are truly excited to be here and I don’t think we could have asked for a better first three days than we have had.” The school hosted an orientation and welcome in August, which was attended by hundreds of parents and students in advance of the first day of school, said Anna-Lucia Roybal, the district’s spokeswoman. “You could tell there was a lot of excitement, and a lot of oohs and aahs,” Roybal said. For years, however, a number of residents tried to thwart the school from being built at its location.

A group known as “Stop San Marcos K-8” expressed concerns about the location of the project, which it says imperils the children who will attend. Double Peak sits just below the crest of San Elijo Road, where the speed limit is 50 miles per hour and the street begins a steep 10 percent grade both eastbound and westbound. Motorists are often seen driving in excess of the 50 mph speed limit, some using the street as a shortcut to Carlsbad and Encinitas and others using it to get to nearby Cal State San Marcos. The group, spearheaded by local resident Andy Lee, said that these conditions would endanger the lives of children who will have to cross San Elijo Road in order to make it to and from school. District officials responded by saying they were taking necessary measures to calm traffic in the area as well as shorten the queue of vehicles some anticipated would line up before and after school. A 25-mile-per-hour speed limit is now in place in the immediate vicinity of the school, and the drop-off area includes a long loop that brings in most of the vehicles off the street. Baum said that the school staff is constantly working on ways to adTURN TO DOUBLE PEAK ON 21