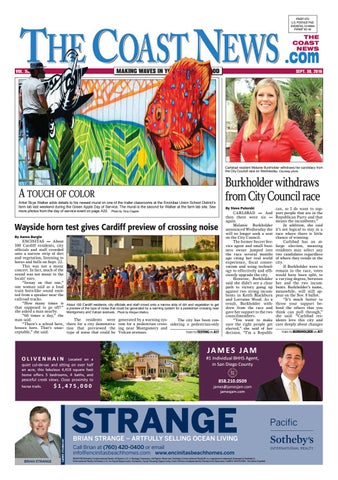 A touch of color Artist Skye Walker adds details to his newest mural on one of the trailer classrooms at the Encinitas Union School District’s farm lab last weekend during the Green Apple Day of Service. The mural is the second for Walker at the farm lab site. See more photos from the day of service event on page A22. Photo by Tony Cagala

ENCINITAS — About 100 Cardiff residents, city officials and staff crowded onto a narrow strip of dirt and vegetation, listening to horns and bells on Sept. 22. This was not a music concert. In fact, much of the sound was not music to the locals’ ears. “Ix-nay on that one,” one woman said as a loud train horn-like sound emitted from a speaker near the railroad tracks. “How many times is that supposed to go off?” she asked a man nearby. “60 times a day,” the man said. “There’s a school here, houses here. That’s unacceptable,” she said.

About 100 Cardiff residents, city officials and staff crowd onto a narrow strip of dirt and vegetation to get a preview of the type of noise that could be generated by a warning system for a pedestrian crossing near Montgomery and Vulcan avenues. Photo by Morgan Mallory

Located on a quiet cul-de-sac and sitting on over half an acre, this fabulous 4,419 square foot home offers 5 bedrooms, 4 baths, and peaceful creek views. Close proximity to

generated by a warning sysThe city has been contem for a pedestrian cross- sidering a pedestrian-only ing near Montgomery and TURN TO TESTING ON A17 Vulcan avenues.

CARLSBAD — And then there were six — again. Melanie Burkholder announced Wednesday she will no longer seek a seat on the City Council. The former Secret Service agent and small business owner jumped into the race several months ago citing her real world experience, fiscal conservatism and using technology to effectively and efficiently upgrade the city. However, Burkholder said she didn’t see a clear path to victory going up against two strong incumbents in Keith Blackburn and Lorraine Wood. As a result, Burkholder withdrew from the race and gave her support to the two councilmembers. “You want to make sure the right people get elected,” she said of her decision. “I’m a Republi-

can, so I do want to support people that are in the Republican Party and that means the incumbents.” In addition, she said it’s not logical to stay in a race where there is little chance of winning. Carlsbad has an atlarge election, meaning residents may select any two candidates regardless of where they reside in the city. If Burkholder were to remain in the race, votes would have been split, to a varying degree, between her and the two incumbents. Burkholder’s name, meanwhile, will still appear on the Nov. 8 ballot. “It’s much better to throw your support behind the others that you think can pull through,” she said. “Carlsbad residents love this city and care deeply about changes TURN TO BURKHOLDER ON A17