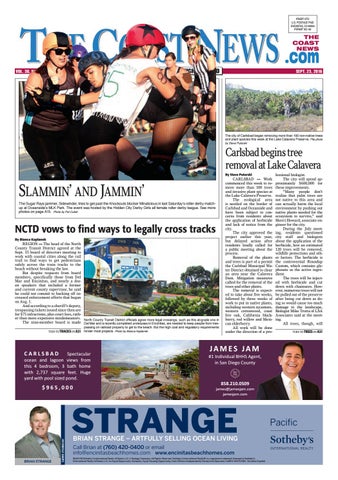 and plant species this week at the Lake Calavera Preserve. File photo

Slammin’ and Jammin’ The Sugar Rays jammer, Sidewinder, tries to get past the Knockouts blocker Minalicious in last Saturday’s roller derby matchup at Oceanside’s MLK Park. The event was hosted by the Hidden City Derby Girls all female roller derby league. See more photos on page A15. Photo by Pat Cubel

REGION — The head of the North County Transit District agreed at the Sept. 15 board of directors meeting to work with coastal cities along the rail trail to find ways to get pedestrians safely across the train tracks to the beach without breaking the law. But despite requests from board members, specifically those from Del Mar and Encinitas, and nearly a dozen speakers that included a former and current county supervisor, he said he could not commit to backing off increased enforcement efforts that began on Aug. 1. And according to a sheriff’s deputy, trespassing tickets issued since then are for $75 infractions, plus court fees, rather than more expensive misdemeanors. North County Transit District officials agree more legal crossings, such as this at-grade one in The nine-member board is made Del Mar and a recently completed underpass in Encinitas, are needed to keep people from tresTURN TO TRACKS ON A21

passing on railroad property to get to the beach. But the high cost and regulatory requirements hinder most projects. Photo by Bianca Kaplanek

CARLSBAD — Work commenced this week to remove more than 100 trees and invasive plant species at the Lake Calavera Preserve. The ecological area is nestled on the border of Carlsbad and Oceanside and have been subject to concerns from residents about the application of herbicide and lack of notice from the city. The city approved the project earlier this year, but delayed action after residents loudly called for a public meeting about the process. Removal of the plants and trees is part of a permit the Carlsbad Municipal Water District obtained to clear an area near the Calavera Dam. Mitigation measures called for the removal of the trees and other plants. The removal is expected to take about five weeks, followed by three weeks of work to put in native plants, including western sycamore, western cottonwood, coast live oak, California blackberry, red willow and Mexican elderberry. All work will be done under the direction of a pro-

fessional biologist. The city will spend apRANCHO proximately $600,000 for these improvements. SFNEWS “Many people don’t realize that palm trees are not native to this area and can actually harm the local environment by pushing out native plants needed for the ecosystem to survive,” said Sherri Howard, associate engineer for the city. During the July meeting, residents questioned city staff and biologists about the application of the herbicide, how an estimated 120 trees will be removed, wildlife protections and other factors. The herbicide is the controversial Roundup Custom, which contains glyphosate as the active ingredient. The trees will be injected with herbicide and cut down with chainsaws. However, numerous trees will not be pulled out of the preserve after being cut down as doing so would cause too much damage to the landscape, Biologist Mike Trotta of LSA Associates said at the meeting. All trees, though, will

TURN TO TREES ON A21