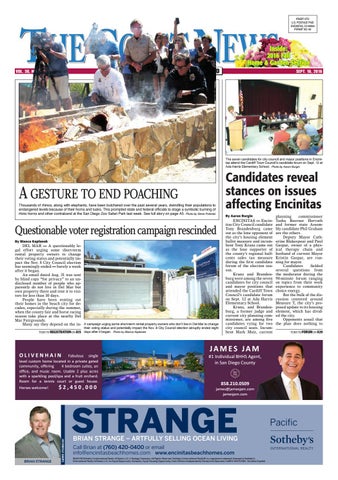 A gesture to end poaching Thousands of rhinos, along with elephants, have been butchered over the past several years, dwindling their populations to endangered levels because of their horns and tusks. This prompted state and federal officials to stage a symbolic burning of rhino horns and other contraband at the San Diego Zoo Safari Park last week. See full story on page A5. Photo by Steve Puterski

DEL MAR — A questionably legal effort urging some short-term rental property owners to change their voting status and potentially impact the Nov. 8 City Council election has seemingly ended — barely a week after it began. An email dated Aug. 31 was sent by blind copy “for privacy” to an undisclosed number of people who apparently do not live in Del Mar but own property there and rent it to visitors for less than 30 days. People have been renting out their homes in the beach city for decades, especially during the summer, when the county fair and horse racing season take place at the nearby Del Mar Fairgrounds. Many say they depend on the in- A campaign urging some short-term rental property owners who don’t live in Del Mar to change TURN TO REGISTRATION ON A15

Fabulous single level custom home located in a private gated community, offering 4 bedroom suites, an office, and music room. Usable 2 plus acres with a sparkling pool/spa and a fruit orchard. Room for a tennis court or guest house.

ENCINITAS — Encinitas City Council candidate Tony Brandenburg came out as the lone opponent of the city’s housing element ballot measure and incumbent Tony Kranz came out as the lone supporter of the county’s regional halfcents sales tax measure during the first candidate forum of the election season. Kranz and Brandenburg were among the seven candidates for city council and mayor positions that attended the Cardiff Town Council’s candidate forum on Sept. 12 at Ada Harris Elementary School. Kranz, and Brandenburg, a former judge and current city planning commissioner, are among five candidates vying for two city council seats. Incumbent Mark Muir, current

planning commissioner Tasha Boerner Horvath and former state Assembly candidate Phil Graham are the others. Deputy Mayor Catherine Blakespear and Paul Gaspar, owner of a physical therapy chain and husband of current Mayor Kristin Gaspar, are running for mayor. Candidates fielded several questions from the moderator during the 90-minute forum ranging on topics from their work experience to community choice energy. But the bulk of the discussion centered around Measure T, the city’s proposed update to its housing element, which has divided the city. Opponents assail that the plan does nothing to TURN TO FORUM ON A29