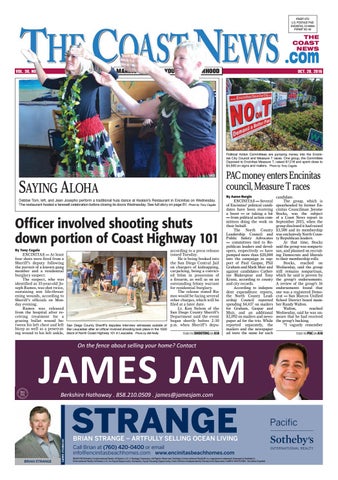 Political Action Committees are pumping money into the Encinitas City Council and Measure T races. One group, the Committee Opposed to Encinitas Measure T, raised $7,218 and spent close to $4,500 on signs and mailers. Photo by Tony Cagala

ENCINITAS — At least four shots were fired from a Sheriff’s deputy following the pursuit of a known gang member and a residential burglary suspect. The suspect, who was identified as 35-year-old Joseph Ramos, was shot twice, sustaining non life-threatening wounds, according to Sheriff’s officials on Monday evening. Ramos was released from the hospital after receiving treatment for a grazing bullet wound between his left chest and left San Diego County Sheriff’s deputies interview witnesses outside of bicep as well as a penetrat- Bar Leucadian after an officer involved shooting took place in the 1500 ing wound to his left ankle, block of North Coast Highway 101 in Leucadia. Photo by Bill Reilly

according to a press release issued Tuesday. He is being booked into the San Diego Central Jail on chargers of kidnapping, carjacking, being a convicted felon in possession of a firearm, as well as on an outstanding felony warrant for residential burglary. The release stated Ramos would be facing several other charges, which will be filed at a later date. Lt. Ken Nelson of the San Diego County Sheriff’s Department said the event began shortly before 2:30 p.m. when Sheriff’s depuTURN TO SHOOTING ON A18

ENCINITAS — Several of Encinitas’ political candidates have been receiving a boost — or taking a hit — from political action committees doing the work on their behalf. The North County Leadership Council and Public Safety Advocates — committees tied to Republican leaders and developers, respectively — have pumped more than $20,000 into the campaign in support of Paul Gaspar, Phil Graham and Mark Muir and against candidates Catherine Blakespear and Tony Kranz, according to county and city records. According to independent expenditure reports, the North County Leadership Council reported spending $4,437 on mailers for Graham, Gaspar and Muir, and an additional $2,092 on mailers and newspaper ad for the trio. While reported separately, the mailers and the newspaper ad were the same for each

JAMES JAM On the fence about selling your home? Contact

candidate. The group, which is spearheaded by former Encinitas Councilman Jerome Stocks, was the subject of a Coast News report in September 2015, when the group disclosed it had raised $3,500 and its membership was exclusively North County Republican leaders. At that time, Stocks said the group was nonpartisan, and planned on recruiting Democrats and liberals to their membership rolls. Stocks, reached on Wednesday, said the group still remains nonpartisan, which he said is proven by the group’s endorsements. A review of the group’s 16 endorsements found that one was a registered Democrat — San Marcos Unified School District board member Randy Walton. Walton, reached Wednesday, said he was unaware that he had received the group’s backing. “I vaguely remember TURN TO PAC ON A18