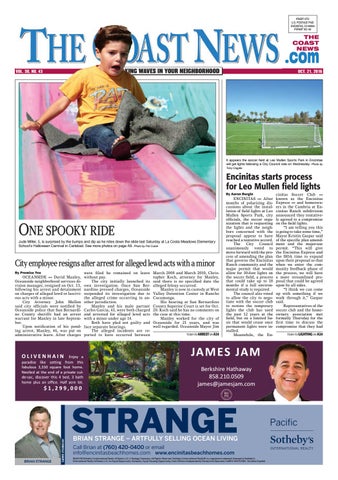 .com It appears the soccer field at Leo Mullen Sports Park in Encinitas will get lights following a City Council vote on Wednesday. Photo by

One spooky ride Jude Miller, 5, is surprised by the bumps and dip as he rides down the slide last Saturday at La Costa Meadows Elementary School’s Halloween Carnival in Carlsbad. See more photos on page A9. Photo by Pat Cubel

OCEANSIDE — David Manley, Oceanside neighborhood services division manager, resigned on Oct. 13, following his arrest and detainment on charges of alleged lewd or lascivious acts with a minor. City Attorney John Mullen said city officials were notified by Oceanside police that San Bernardino County sheriffs had an arrest warrant for Manley in late September. Upon notification of his pending arrest, Manley, 46, was put on administrative leave. After charges

Enjoy a paradise like setting from this fabulous 3,330 square foot home. Nestled at the end of a private culde-sac, discover this 4 bed, 3 bath home plus an office. Half acre lot.

were filed he remained on leave without pay. The city initially launched its own investigation. Once San Bernardino pressed charges, Oceanside suspended its investigation due to the alleged crime occurring in another jurisdiction. Manley and his male partner Carlos Garcia, 43, were both charged and arrested for alleged lewd acts with a minor under age 14. Both have pled not guilty and face separate hearings. The alleged incidents are reported to have occurred between

March 2008 and March 2010, Christopher Koch, attorney for Manley, said there is no specified date the alleged felony occurred. Manley is now in custody at West Valley Detention Center in Rancho Cucamonga. His hearing at San Bernardino County Superior Court is set for Oct. 20. Koch said he has no comments on the case at this time. Manley worked for the city of Oceanside for 21 years, and was well regarded. Oceanside Mayor Jim TURN TO ARREST ON A24

ENCINITAS — After months of polarizing discussions about the installation of field lights at Leo Mullen Sports Park, city officials, the soccer organization that is requesting the lights and the neighbors concerned with the proposal appear to have reached a tentative accord. The City Council unanimously voted to move forward with the process of amending the plan that governs the Encinitas Ranch community and the major permit that would allow for 30-foot lights on the soccer field, a process that could take up to 18 months if a full environmental study is required. The council also voted to allow the city to negotiate with the soccer club to restore the temporary lights the club has used the past 12 years at the field, but on a limited basis that would cease once permanent lights were installed. Meanwhile, the En-

cinitas Soccer Club — known as the Encinitas Express — and homeowners in the Cambria at Encinitas Ranch subdivision announced they tentatively agreed to a compromise on the field lights. “I am telling you this is going to take some time,” Mayor Kristin Gaspar said of the specific plan amendment and the major-use permit. “This will give the Encinitas Express and the HOA time to expand upon their proposal so that when we enter the community feedback phase of the process, we will have a more streamlined proposal that could be agreed upon by all sides. “I think we can come up with something if we work through it,” Gaspar said. Representatives of the soccer club and the homeowners association met formally Thursday for the first time to discuss the compromise that they had TURN TO LIGHTING ON A24