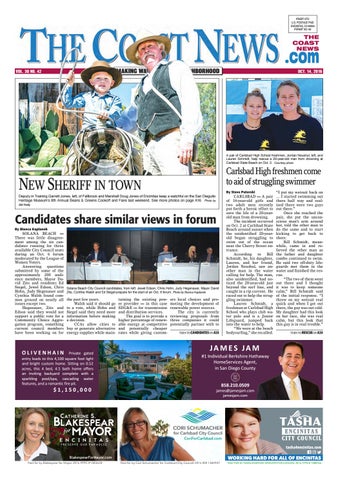 CARLSBAD — A pair of 14-year-old girls and two adult men recently put forth a heroic effort to save the life of a 20-yearold man from drowning. The incident occurred on Oct. 2 at Carlsbad State Beach around sunset when the unidentified 20-yearold began struggling to swim out of the ocean near the Cherry Street entrance. According to Bill Schmidt, he, his daughter, Lauren, and her friend, Jordan Neushul, saw another man in the water calling for help. The man, also unidentified, had noticed the 20-year-old just beyond the surf line, and caught in a rip current. He raced out to help the struggling swimmer. Lauren Schmidt, a freshman at Carlsbad High School who plays club water polo and is a Junior Lifeguard, jumped back into the water to help. “We were at the beach bodysurfing,” she recalled.

SOLANA BEACH — There was little disagreement among the six candidates running for three available City Council seats during an Oct. 6 forum moderated by the League of Women Voters. Answering questions submitted by some of the approximately 200 audience members, Mayor David Zito and residents Ed Siegel, Jewel Edson, Chris Hohn, Judy Hegenauer and Cynthia Walsh found common ground on nearly all issues except two. Hegenauer, Zito and Edson said they would not support a public vote for a Community Choice Aggregation program, something current council members have been working on for

the past few years. Walsh said it should go to a vote, while Hohn and Siegel said they need more information before making a decision. CCAs allow cities to buy or generate alternative energy supplies while main-

taining the existing power provider — in this case SDG&amp;E — for transmission and distribution services. The goal is to provide a higher percentage of renewable energy at competitive and potentially cheaper rates while giving custom-

ers local choices and promoting the development of renewable power sources. The city is currently reviewing proposals from three companies it could potentially partner with to TURN TO CANDIDATES ON A25

“I put my wetsuit back on … I started swimming out there half way and realized there were two guys out there.” Once she reached the pair, she put the unconscious man’s arm around her, told the other man to do the same and to start kicking to get back to shore. Bill Schmidt, meanwhile, came in and relieved the other man as the father and daughter combo continued to swim. He said two off-duty lifeguards met them in the water and finished the rescue. “The two of them went out there and I thought it was to keep someone calm,” Bill Schmidt said of the initial response. “I threw on my wetsuit real quick and when I got out there, the guy was out cold. My daughter had this look on her face, she was real calm, but this look that this guy is in real trouble.” TURN TO RESCUE ON A25