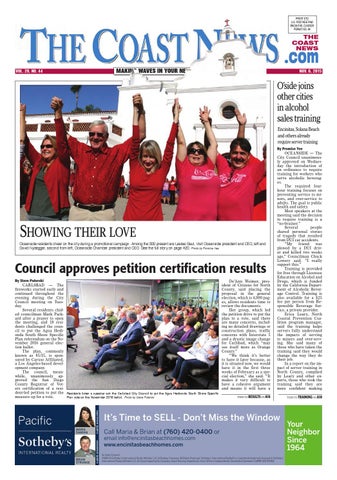 O’side joins other cities . in alcohol sales training THE

De’Ann Weimer, president of Citizens for North County, said placing the proposal in the general election, which is 4,000 pages, allows residents time to review the documents. Her group, which led the petition drive to put the plan to a vote, said there are many concerns, including no detailed drawings or construction plans, traffic concerns with Interstate 5 and a drastic image change for Carlsbad, which “may see itself more as Orange County.” “We think it’s better to have it later because, as it is situated now, we would have it in the first three weeks of February as a special election,” she said. “It makes it very difficult to have a cohesive argument and means it will have a

OCEANSIDE — The City Council unanimously approved on Wednesday the introduction of an ordinance to require training for workers who serve alcoholic beverages. RANCHO The required fourSFNEWS hour training focuses on preventing service to minors, and over-service to adults. The goal is public health and safety. Most speakers at the meeting said the decision to require training is a “no-brainer.” Several people shared personal stories of tragedy that resulted from DUI car accidents. “My friend was plowed by a DUI driver and killed two weeks ago,” Councilman Chuck Lowery said. “I really support this.” Training is provided for free through Licensee Education on Alcohol and Drugs, which is funded by the California Department of Alcoholic Beverage Control. Training is also available for a $25 fee per person from Responsible Beverage Service, a private provider. Erica Leary, North Coastal Prevention Coalition program manager, said the training helps servers fully understand the impacts of serving to minors and over-serving. She said many of those who have taken the training said they would change the way they do their job. In a report on the impact of server training in North County, complied by Leary and other experts, those who took the training said they are more confident making

TURN TO RESULTS ON A16

TURN TO TRAINING ON A18

Showing their love Oceanside residents cheer on the city during a promotional campaign. Among the 300 present are Leslee Gaul, Visit Oceanside president and CEO, left and David Nydegger, second from left, Oceanside Chamber president and CEO. See the full story on page A20. Photo by Promise Yee

CARLSBAD — The fireworks started early and continued throughout the evening during the City Council meeting on Tuesday. Several residents chided councilman Mark Packard after a prayer to open the meeting, and 18 residents challenged the council to put the Agua Hedionda South Shore Specific Plan referendum on the November 2016 general election ballot. The plan, commonly known as 85/15, is sponsored by Caruso Affiliated, a Los Angeles-based development company. The council, meanwhile, unanimously approved the San Diego County Registrar of Voters certification of a resident-led petition to put the Residents listen a speaker ask the Carlsbad City Council to put the Agua Hedionda South Shore Specific measure up for a vote. Plan vote on the November 2016 ballot. Photo by Steve Puterski