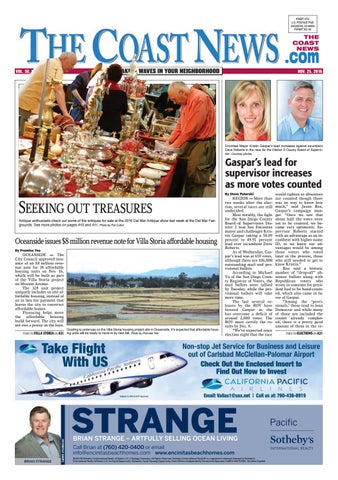 Encinitas Mayor Kristin Gaspar’s lead increases against incumbent Dave Roberts in the race for the District 3 County Board of Supervisor. Courtesy photos

Seeking out treasures Antique enthusiasts check out some of the antiques for sale at the 2016 Del Mar Antique show last week at the Del Mar Fairgrounds. See more photos on pages A10 and A11. Photo by Pat Cubel

OCEANSIDE — The City Council approved issuance of an $8 million revenue note for 38 affordable housing units on Nov. 16, which will be built as part of the Villa Storia project on Mission Avenue. The 328 unit project uniquely includes on site affordable housing, instead of an in lieu fee payment that leaves the city to construct affordable homes. Financing helps move the affordable housing build forward. The city will not owe a penny on the loan.

TURN TO VILLA STORIA ON A21

Grading is underway on the Villa Storia housing project site in Oceanside. It’s expected that affordable housing units will be ready to move in by next fall. Photo by Promise Yee

REGION — More than two weeks after the election, several races are still undecided. Most notably, the fight for the San Diego County Board of Supervisors District 3 seat has Encinitas mayor and challenger Kristin Gaspar taking a 50.09 percent to 49.91 percent lead over incumbent Dave Roberts. As of Wednesday, Gaspar’s lead was at 659 votes, although there are 106,000 outstanding mail and provisional ballots. According to Michael Vu of the San Diego County Registrar of Voters, the mail ballots were tallied by Tuesday, while the provisional ballots will take more time. The last several releases by the ROV have favored Gaspar as she has overcome a deficit of around 2,000 votes. The ROV must certify the results by Dec. 8. “We’ve expected since election night that the race

would tighten as absentees are counted though there was no way to know how much,” said Jason Roe, Gaspar’s campaign manger. “Once we saw that about half the votes were yet to be counted, we became very optimistic. Supervisor Roberts started with an advantage as an incumbent with higher name ID, so we knew our advantages would be among those voters who voted later in the process, those who still needed to get to know Kristin.” Roe said a historic number of “drop-off” absentee ballots along with Republican voters who wrote in someone for president had to be hand-counted, which also came in favor of Gaspar. “Among the ‘provisionals,’ those tend to lean Democrat and while many of those are included the counts already completed, there is a pretty good amount of them in the reTURN TO ELECTIONS ON A21