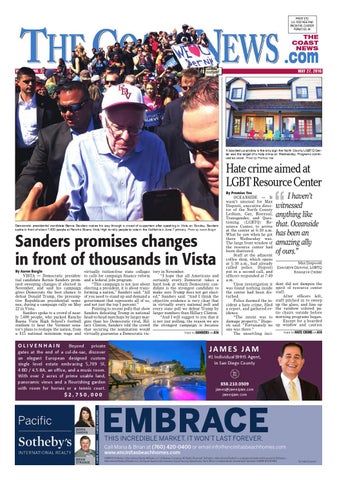 A boarded up window is the only sign the North County LGBTQ Center was the target of a hate crime on Wednesday. Programs continued as usual. Photo by Promise Yee

Democratic presidential candidate Bernie Sanders makes his way through a crowd of supporters after speaking in Vista on Sunday. Sanders spoke in front of about 7,400 people at Rancho Buena Vista High to rally people to vote in the California’s June 7 primary. Photo by Aaron Burgin

VISTA — Democratic presidential candidate Bernie Sanders promised sweeping changes if elected in November, and said his campaign gives Democrats the best chance to defeat Donald Trump, the presumptive Republican presidential nominee, during a campaign rally on May 22 in Vista. Sanders spoke to a crowd of nearly 7,400 people, who packed Rancho Buena Vista High School’s football stadium to hear the Vermont senator’s plans to reshape the nation, from a $15 national minimum wage and

virtually tuition-free state colleges to calls for campaign finance reform and a federal jobs program. “This campaign is not just about electing a president, it is about transforming a nation,” Sanders said. “All of you need to stand up and demand a government that represents all of us, and not just the top 1 percent.” Pointing to recent polls that show Sanders defeating Trump in national head-to-head matchups by larger margins than his Democratic rival, Hillary Clinton, Sanders told the crowd that securing the nomination would virtually guarantee a Democratic vic-

Beyond private gates at the end of a cul-de-sac, discover an elegant European designed custom single level estate embracing 5,709 SF, 4 BD / 4.5 BA, an office, and a music room. With over 2 acres of prime usable land, panoramic views and a flourishing garden with room for horses or a tennis court.

tory in November. “I hope that all Americans and certainly every Democrat takes a hard look at which Democratic candidate is the strongest candidate to make sure Trump does not get elected,” Sanders said. “And I think the objective evidence is very clear that in virtually every national poll and every state poll we defeat Trump by larger numbers than Hillary Clinton. “And I will suggest to you that it is not just polling, the reason we are the strongest campaign is because TURN TO SANDERS ON A16

OCEANSIDE — It wasn’t unusual for Max Disposti, executive director of the North County Lesbian, Gay, Bisexual, Transgender, and Questioning (LGBTQ) Resource Center, to arrive at the center at 6:30 a.m. What he saw when he got there Wednesday was. The large front window of the resource center had been shattered. Staff at the adjacent coffee shop, which opens at 5:30 a.m., had already called police. Disposti put in a second call, and officers responded at 7:40 a.m. Upon investigation it was found nothing inside the center had been disturbed. Police deemed the incident a hate crime, filed a report, and gathered evidence. “The intent was to damage property,” Disposti said. “Fortunately no one was there.” The unsettling inci-

anything like that. Oceanside has been an amazing ally of ours.” Max Dispoosti Executive Director, LGBTQ Resource Center

dent did not dampen the spirit of resource center staff. After officers left, staff pitched in to sweep up the glass, and line up the rainbow colored patio chairs outside before morning programs began. Except for a boarded up window and caution TURN TO HATE CRIME ON A16