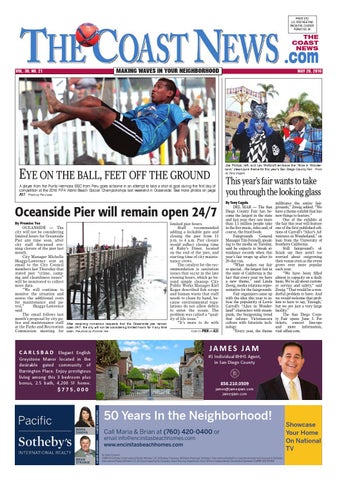 Eye on the ball, feet off the ground

A player from the Punta Hermosa BSC from Peru goes airborne in an attempt to take a shot at goal during the first day of competition at the 2016 FIFA World Beach Soccer Championships last weekend in Oceanside. See more photos on page A17. Photo by Pat Cubel

OCEANSIDE — The city will not be considering limited hours for Oceanside Pier any time soon, after city staff discussed evening closure of the pier last month. City Manager Michelle Skaggs-Lawrence sent an email to the City Council members last Thursday that stated pier “crime, camping and cleanliness issues” will be monitored to collect more data. “We will continue to monitor the situation and assess the additional costs for maintenance and patrol,” Skaggs-Lawrence said. The email follows last month’s proposal by city police and maintenance staff After receiving numerous requests that the Oceanside pier remain at the Parks and Recreation open 24/7, the city will not be considering limited hours for it any time Commission meeting for soon. File photo by Promise Yee

limited pier hours. Staff recommended adding a lockable gate and closing the pier from 11 p.m. to 4 a.m. Pier closure would reflect closing time of Ruby’s Diner, located on the end of the pier, and starting time of city maintenance crews. The catalyst for the recommendation is sanitation issues that occur in the late evening hours, which go beyond simple cleanup. City Public Works Manager Kiel Koger described fish scraps and human waste that staff needs to clean by hand, because environmental regulations do not allow debris to enter the ocean. The problem was called a “quality of life issue.” “It’s more to do with TURN TO PIER ON A21

DEL MAR — The San Diego County Fair has become the largest in the state and last year they saw more than 1.5 million people take in the live music, rides and, of course, the fried foods. Fairgrounds General Manager Tim Fennell, speaking to the media on Tuesday, said he expects to break attendance records when this year’s fair wraps up after its 26-day run. “What makes our fair so special…the largest fair in the state of California is the fact that every year we have a new theme,” said Linda Zweig, media relations representative for the fairgrounds. Fair organizers came up with the idea this year to infuse the popularity of Lewis Carroll’s “Alice in Wonderland” characters with steampunk, the burgeoning trend that infuses Victorian-era culture with futuristic technology. “Every year, the theme

infiltrates the entire fairgrounds,” Zweig added. “We have a theme exhibit that has new things to feature.” One of the exhibits at the fair this year will feature one of the first published editions of Carroll’s “Alice’s Adventures in Wonderland,” on loan from the University of Southern California. Still fairground’s officials say they aren’t too worried about outgrowing their venue even as the event grows ever more popular each year. “We have been filled almost to capacity on a daily basis. We’re all about customer service and safety,” said Zweig. “That would be a wonderful problem to have. And we would welcome that problem to have to say, ‘Enough,’ but we are just a very large facility.” The San Diego County Fair opens June 3. For tickets, concert line-ups and more information, visit sdfair.com.

C A R L S B A D Elegant English