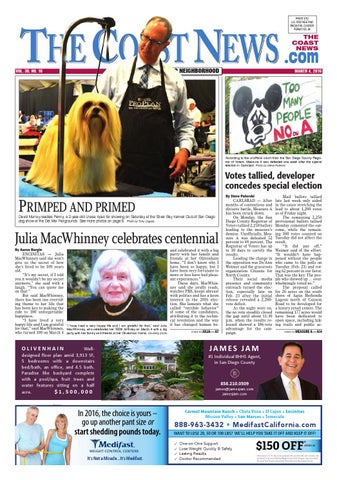 .com According to the unofficial count from the San Diego County Registrar of Voters, Measure A was defeated one week after the special election in Carlsbad. Photo by Steve Puterski

and celebrated it with a big party with her family and friends at her Olivenhain home. “I don’t know why I have been so happy, but I have been very fortunate to more or less have had pleasant experiences.” These days, MacWhinney said she avidly reads, watches PBS, keeps abreast with politics and has a keen interest in the 2016 election. She laments what she called “terrible behavior” of some of the candidates, attributing it to the technical revolution and the way it has changed human beTURN TO JULIA ON A7

Welldesigned floor plan amid 3,913 SF, 5 bedrooms with a downstairs bed/bath, an office, and 4.5 bath. Paradise like backyard complete with a pool/spa, fruit trees and water features sitting on a half acre. $1,500,000

It’s Not a Miracle...It’s Medifast.

Mail ballots tallied late last week only aided in the cause stretching the lead to about 1,200 votes as of Friday night. The remaining 2,250 provisional ballots tallied Monday cemented the outcome, while the remaining 300 votes counted on Tuesday did not affect the result. “It did pay off,” Weimer said of the effort. “It wouldn’t have happened without the people who came to the polls on Tuesday (Feb. 23) and voting 62 percent in our favor. That was the key. The people who showed up … overwhelmingly voted no.” The proposal called for 26 acres on the south shore of Agua Hedionda Lagoon north of Cannon Road to be developed for a luxury retail center. The remaining 177 acres would have been dedicated to open space, including hiking trails and public acTURN TO MEASURE A ON A14

In 2016, the choice is yours – go up another pant size or start shedding pounds today.

CARLSBAD — After months of contentious and divisive battle, Measure A has been struck down. On Monday, the San Diego County Registrar of Voters tallied 2,250 ballots leading to the measure’s demise. Unofficially, Measure A was defeated 52 percent to 48 percent. The Registrar of Voters has up to 30 days to certify the results. Leading the charge in the opposition was De’Ann Weimer and the grassroots organization Citizens for North County. Their social media presence and community outreach turned the election, especially late on Feb. 23 after the initial release revealed a 2,200vote deficit. As the night wore on, the no vote steadily closed the gap until about 11:30 p.m. when the results released showed a 186-vote advantage for the campaign.