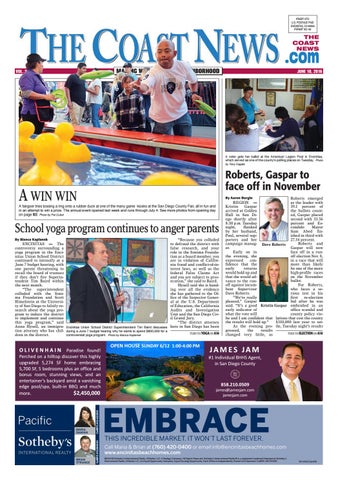 .com A voter gets her ballot at the American Legion Post in Encinitas, which served as one of the county’s polling places on Tuesday. Photo by Tony Cagala

Roberts, Gaspar to RANCHO SFNEWS face off in November

A fairgoer tries tossing a ring onto a rubber duck at one of the many game kiosks at the San Diego County Fair, all in fun and in an attempt to win a prize. The annual event opened last week and runs through July 4. See more photos from opening day on page B2. Photo by Pat Cubel

ENCINITAS — The controversy surrounding a yoga program in the Encinitas Union School District continued to intensify at a June 7 budget hearing, with one parent threatening to recall the board of trustees if they don’t fire Superintendent Tim Baird within the next month. “The superintendent colluded with the Sonima Foundation and Scott Himelstein at the University of San Diego to falsify research about the yoga program to induce the district to implement and continue this yoga program,” said Anna Hysell, an immigra- Encinitas Union School District Superintendent Tim Baird discusses tion attorney who has chil- during a June 7 budget hearing why he wants to spend $800,000 for a dren in the district. controversial yoga program. Photo by Bianca Kaplanek

Perched on a hilltop discover this highly upgraded 5,274 SF home embracing 5,700 SF, 5 bedrooms plus an office and bonus room, stunning views, and an entertainer’s backyard amid a vanishing edge pool/spa, built-in BBQ and much more. $2,450,000

“Because you colluded to defraud the district with false research, and your role in the Sonima Foundation as a board member, you are in violation of California fraud and conflict-of-interest laws, as well as the federal False Claims Act and you are subject to prosecution,” she said to Baird. Hysell said she is handing over all the evidence she has gathered to the Office of the Inspector General at the U.S. Department of Education, the California Audits and Investigation Unit and the San Diego Civil Grand Jury. “The district attorney here in San Diego has been TURN TO YOGA ON A16

Roberts emerged as the leader with REGION — 39.1 percent of Kristin Gaspar the ballots countarrived at Golden ed, Gaspar placed Hall in San Disecond with 33.56 ego shortly after percent and Es8:30 p.m. Tuesday condido Mayor night, flanked Sam Abed finby her husband, ished in third with Paul, several sup27.34 percent. porters and her Roberts and campaign manag- Dave Roberts Gaspar will now er. face off in a runEarly on in off election Nov. 8, the evening, she in a race that will expressed conmore than likely fidence that the be one of the more early returns high-profile races would hold up and on the November that she would adballot. vance to the runFor Roberts, off against incumwho faces a sebent Supervisor rious test in his Dave Roberts. first re-election “We’re really bid after he was pleased,” Gaspar said. “It’s a good Kristin Gaspar embroiled in an office scandal and early indicator of county policy viowhat the vote will be and I am confident that lations that cost the county $310,000 last year to setthe results will hold up.” As the evening pro- tle, Tuesday night’s results gressed, the results TURN TO ELECTION ON A18 changed very little, as