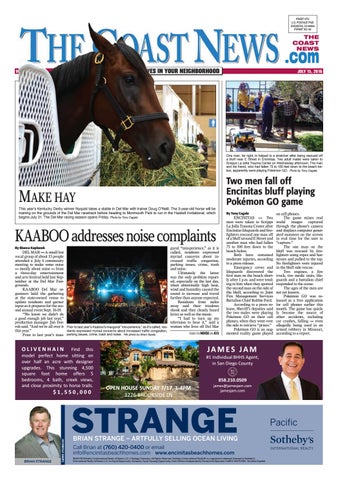 One man, far right, is helped to a stretcher after being rescued off a bluff near E Street in Encinitas. Two adult males were taken to Scripps La Jolla Trauma Center on Wednesday afternoon. The man and his friend, who had fallen 75 to 100 feet down to the beach below, apparently were playing Pokémon GO. Photo by Tony Cagala

Make hay This year’s Kentucky Derby winner Nyquist takes a stable in Del Mar with trainer Doug O’Neill. The 3-year-old horse will be training on the grounds of the Del Mar racetrack before heading to Monmouth Park to run in the Haskell Invitational, which begins July 31. The Del Mar racing season opens Friday. Photo by Tony Cagala

DEL MAR — A small but vocal group of about 15 people attended a July 6 community meeting to make some noise — mostly about noise — from a three-day entertainment and arts festival held last September at the Del Mar Fairgrounds. KAABOO Del Mar organizers held the gathering at the state-owned venue to update residents and garner input as it prepares for the second annual event Sept. 16-18. “We know we didn’t do a good enough job last year,” production manager Jim Dorroh said. “And we’re all over it Prior to last year’s Kaaboo’s inaugural “mix-perience,” as it’s called, residents expressed myriad concerns about increased traffic congestion, this year.” Prior to last year’s inau- parking issues, crime, trash and noise. File photo by Brian Spady

gural “mix-perience,” as it is called, residents expressed myriad concerns about increased traffic congestion, parking issues, crime, trash and noise. Ultimately the latter was the only problem reported, especially on the last day, when abnormally high heat, wind and humidity caused the sound to increase and travel farther than anyone expected. Residents from miles away said their windows shook and they clearly heard lyrics as well as the music. “I had to turn up my television to hear it,” said a woman who lives off Del Mar TURN TO NOISE ON A15

Find this model perfect home sitting on over half an acre with designer upgrades. This stunning 4,500 square foot home offers 5 bedrooms, 4 bath, creek views, and close proximity to horse trails.

ENCINITAS — Two men were taken to Scripps La Jolla Trauma Center after Encinitas lifeguards and firefighters rescued one man off of a bluff around E Street and another man who had fallen 75 to 100 feet down to the beach below. Both have sustained moderate injuries, according to a press release. Emergency crews and lifeguards discovered the first man on the beach shortly after 1 p.m. and were tending to him when they spotted the second man on the side of the bluff, according to Joint Fire Management Services Battalion Chief Robbie Ford. According to a press release, Sheriff’s deputies said the two males were playing Pokémon GO on their cell phones, when they went over the side to retrieve “prizes.” Pokémon GO is an augmented reality game played

on cell phones. The game mixes real world images captured through the phone’s camera and displays computer generated monsters on the screen in real time for the user to “capture.” The one man on the bluff was rescued by firefighters using ropes and harnesses and pulled to the top. No firefighters were injured in the bluff side rescue. Two engines, a fire truck, two medic units, lifeguards and a battalion chief responded to the scene. The ages of the men are not yet known. Pokémon GO was released as a free application for cell phones earlier this month. The game has quickly become the source of other accidents, including car crashes, falling — even allegedly being used in an armed robbery in Missouri, according to a report.