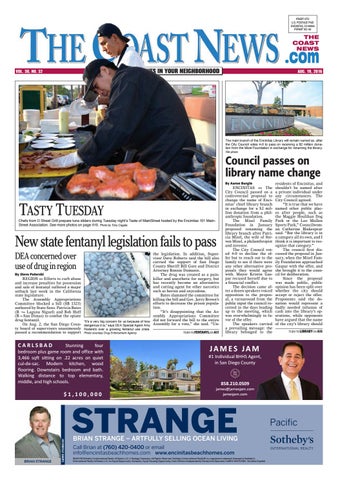 The main branch of the Encinitas Library will remain named so, after the City Council votes 4-0 to pass on receiving a $2 million donation from the Mizel Foundation in exchange for renaming the library. File photo

the legislation. In addition, Supervisor Dave Roberts said the bill also carried the support of San Diego County Sheriff Bill Gore and District Attorney Bonnie Dumanis. The drug was created as a painkiller and anesthetic for surgery, but has recently become an alternative and cutting agent for other narcotics such as heroin and oxycodone. Bates slammed the committee for killing the bill and Gov. Jerry Brown’s efforts to decrease the prison population. “It’s disappointing that the Assembly Appropriations Committee “It’s a very big concern for us because of how did not forward the bill to the entire dangerous it is,” says DEA Special Agent Amy Assembly for a vote,” she said. “Un-

TURN TO FENTANYL ON A11

ENCINITAS — The City Council passed on a controversial proposal to change the name of Encinitas’ chief library branch in exchange for a $2 million donation from a philanthropic foundation. The Mizel Family Foundation in January proposed renaming the library branch after Patricia Mizel, the wife of Steven Mizel, a philanthropist and investor. The City Council voted 4-0 to decline the offer but to reach out to the family to see if there were any other alternative proposals they would agree with. Mayor Kristin Gaspar recused herself due to a financial conflict. The decision came after a dozen speakers voiced opposition to the proposal, a turnaround from the public input the council received in the days leading up to the meeting, which was overwhelmingly in favor of the offer. The speakers carried a prevailing message: the library belonged to the

RANCHO residents of Encinitas, and shouldn’t be named after SFNEWS a private individual under any circumstances. The City Council agreed. “It is true that we have named other public places after people, such as the Maggie Houlihan Dog Park or the Leo Mullen Sports Park,” Councilwoman Catherine Blakespear said. “But the library is in a category all its own, and I think it is important to recognize that category.” The council first discussed the proposal in January, when the Mizel Family Foundation approached Gaspar with the offer, and she brought it to the council for deliberation. Since the proposal was made public, public opinion has been split over whether the city should accept or reject the offer. Proponents said the donation would represent a badly needed infusion of cash into the library’s operations, while opponents have argued that the name of the city’s library should

TURN TO LIBRARY ON A15