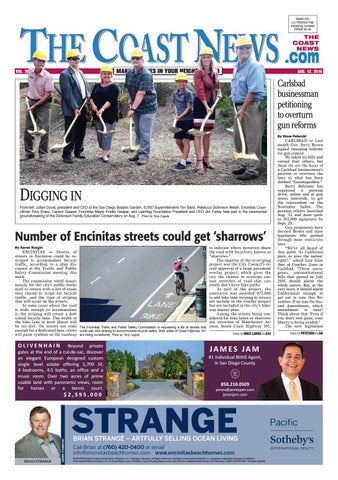 to indicate where motorists share the road with bicyclists, known as “sharrows.” The impetus of the re-striping project was the City Council’s recent approval of a large pavement overlay project, which gives the city the chance to re-stripe certain stretches of road that currently don’t have bike paths. As part of the project, the contractor was awarded $75,000 to add bike lane striping to streets not include in the overlay project but are included in the city’s bikeway master plan. Among the streets being considered for bike lanes or sharrows are stretches of Manchester Avenue, South Coast Highway 101,

CARLSBAD — Last month Gov. Jerry Brown signed sweeping reforms for gun control. He inked six bills and vetoed four others, but those six are the focus of a Carlsbad businessman’s petition to overturn the laws in what has been dubbed “Gunmageddon.” RANCHO Barry Bahrami has SFNEWS organized a petition drive, online and at gun stores statewide, to get the referendum on the November ballot. The petition efforts launched Aug. 12 and must gather 365,000 signatures by Sept. 29. Gun proponents have decried Brown and state legislators who pushed through more restrictive laws. “We’ve all heard of that quote ‘As California goes, so goes the nation’ right?,” asked Lisa Gunther of Gunther Guns in Carlsbad. “These outrageous, unconstitutional bills that passed in July 2016 should alarm the whole nation. But, at the very least, it should alarm Californians enough to get out to vote this November. If we lose the Second Amendment, which amendment is next? Think about that. Even if you don’t own guns, your liberty is being eroded.” The new legislation

TURN TO BIKE LANES ON A14

TURN TO PETITION ON A8

Number of Encinitas streets could get ‘sharrows’ By Aaron Burgin

ENCINITAS — Dozens of streets in Encinitas could be restriped to accommodate bicycle traffic, according to a plan discussed at the Traffic and Public Safety Commission meeting this week. The commission voted unanimously for the city’s public works staff to return with a list of roads they intend to stripe for bicycle traffic, and the type of striping that will occur on the streets. In some cases where the road is wide enough to accommodate it, the striping will create a dedicated bicycle lane. The width of the bike lane in most places will be six feet. On streets not wide The Encinitas Traffic and Public Safety Commission is requesting a list of streets that enough for a dedicated lane, crews could see new striping to accommodate bicycle safety. Both sides of Coast Highway 101 will paint symbols on the roadway are being considered. Photo by Tony Cagala

Beyond private gates at the end of a cul-de-sac, discover an elegant European designed custom single level estate offering 5,709 SF, 4 bedrooms, 4.5 baths, an office and a music room. Over two acres of prime usable land with panoramic views, room for horses or a tennis court.