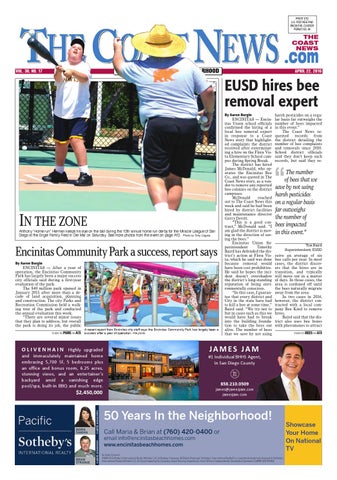 Anthony “Home run” Herman keeps his eye on the ball during the 10th annual home run derby for the Miracle League of San Diego at the Engel Family Field in Del Mar on Saturday. See more photos from the event on page A10. Photo by Tony Cagala

ENCINITAS — After a year of operation, the Encinitas Community Park has largely been a major success city officials said during a first-year evaluation of the park. The $40 million park opened in January 2015 after more than a decade of land acquisition, planning and construction. The city Parks and Recreation Commission held a walking tour of the park and conducted the annual evaluation this week. “There are several minor issues that they plan to address, but overall the park is doing its job, the public TURN TO PARK ON A15

A recent report from Encinitas city staff says the Encinitas Community Park has largely been a success after a year of operation. File photo

and immaculately maintained home embracing 5,700 SF, 5 bedrooms plus an office and bonus room, 6.25 acres, stunning views, and an entertainer’s backyard amid a vanishing edge pool/spa, built-in BBQ and much more.

ceive an average of six bee calls per year. In most cases, the district discovers that the hives are in transition, and typically will move out in a matter of days. In those cases, the area is cordoned off until the bees naturally migrate away from the area. In two cases in 2014, however, the district contracted with a local company Bee Kind to remove hives. Baird said that the district also uses bee boxes with pheromones to attract TURN TO BEES ON A15

harsh pesticides on a regular basis far outweighs the number of bees THE impacted in this event.” VISTA The Coast News requested records from NEWS the district detailing the number of bee complaints and removals since 2010. School district officials said they don’t keep such records, but said they re-

ENCINITAS — Encinitas Union school officials confirmed the hiring of a local bee removal expert in response to a Coast News story that highlighted complaints the district received after exterminating a hive on the Flora Vista Elementary School campus during Spring Break. The district has hired James McDonald, who operates the Encinitas Bee Co., and was quoted in The Coast News story, as a vendor to remove any reported bee colonies on the district campuses. McDonald reached out to The Coast News this week and said he had been hired by district facilities and maintenance director Gerry Devitt. “This is a good contract,” McDonald said. “I am glad the district is moving in the direction of saving the bees.” Encinitas Union Superintendent Timothy Baird has defended the district’s action at Flora Vista, which he said was done because removal would have been cost prohibitive. He said he hopes the incident doesn’t overshadow the district’s long-standing reputation of being environmentally conscious. “In this case, I guarantee that every district and City in the state have had to kill a bee at some time,” Baird said. “We try not to but in cases such as this we would have had to break into the building foundation to take the bees out alive. The number of bees that we save by not using