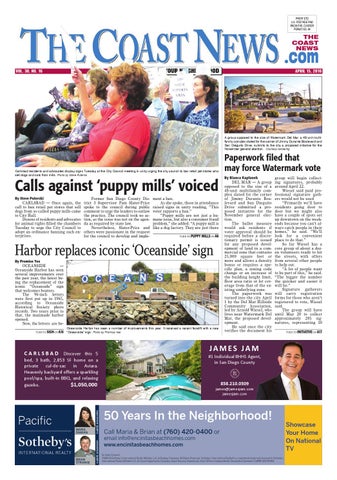 A group opposed to the size of Watermark Del Mar, a 48-unit multifamily complex slated for the corner of Jimmy Durante Boulevard and San Dieguito Drive, submits to the city a proposed initiative for the November general election. Courtesy rendering

CARLSBAD — Once again, the call to ban retail pet stores that sell dogs from so-called puppy mills came to City Hall. Dozens of residents and advocates for animal rights filled the chambers Tuesday to urge the City Council to adopt an ordinance banning such enterprises.

Former San Diego County District 3 Supervisor Pam Slater-Price spoke to the council during public comment to urge the leaders to outlaw the practice. The council took no action, as the issue was not on the agenda as required by state law. Nevertheless, Slater-Price and others were passionate in the request for the council to develop and imple-

ment a ban. As she spoke, those in attendance raised signs in unity reading, “This voter supports a ban.” “Puppy mills are not just a humane issue, but also a consumer fraud problem,” she added. “A puppy mill is like a dog factory. They are just there TURN TO PUPPY MILLS ON A6

OCEANSIDE — Oceanside Harbor has seen several improvements over the past year, the latest being the replacement of the iconic “Oceanside” sign that welcomes boaters. The 96-inch letters were first put up in 1965, according to Oceanside Historical Society photo records. Two years prior to that, the manmade harbor opened. Now, the letters are beTURN TO SIGN ON A16

Oceanside Harbor has seen a number of improvements this year. It received a recent facelift with a new “Oceanside” sign. Photo by Promise Yee

DEL MAR — A group opposed to the size of a 48-unit multifamily complex slated for the corner of Jimmy Durante Boulevard and San Dieguito Drive submitted a proposed initiative for the November general election. The ballot measure would ask residents if voter approval should be required before a discretionary permit is issued for any proposed development of land in a commercial zone that contains 25,000 square feet or more and allows a density bonus or requires a specific plan, a zoning code change or an increase of the building height limit, floor area ratio or lot coverage from that of the existing underlying zone. The paperwork was turned into the city April 1 by the Del Mar Hillside Community Association, led by Arnold Wiesel, who lives near Watermark Del Mar, the proposed development. He said once the city verifies the document his

group will begin collecting signatures, probably around April 22. Wiesel said paid professional signature gathers would not be used “Primarily we’ll have residents going door to door but we might also have a couple of spots set up downtown on the weekends because you can’t always catch people in their homes,” he said. “We’ll look for a convenient place to do that.” So far Wiesel has a core group of about a dozen volunteers ready to hit the streets, with offers from several other people to help out. “A lot of people want to be part of this,” he said. “The bigger the number the quicker and easier it will be.” Signature gatherers will carry registration forms for those who aren’t registered to vote, Wiesel said. The group will have until May 20 to collect approximately 285 signatures, representing 10 TURN TO INITIATIVE ON A17