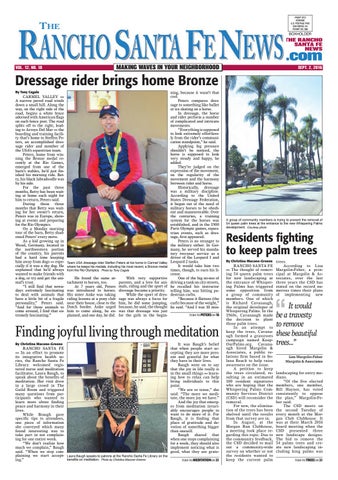 CARMEL VALLEY — A narrow paved road winds down a small hill. Along the way, on the right side of the road, begins a white fence adorned with American flags on each fence post. The road splits off to the right, leading to Arroyo Del Mar — the boarding and training facility that’s home to Steffen Peters, an accomplished dressage rider and member of the USA’s equestrian team. Peters, home from winning the Bronze medal recently at the Rio Games, emerged from one of the barn’s stables, he’d just finished his morning ride. Betty, his black labradoodle was by his side. For the past three months, Betty has been waiting at home each night for him to return, Peters said. During those three months that Betty was waiting for her owner’s return, Peters was in Europe, showing at events and preparing for the Rio Olympics. On a Monday morning tour of the barn, Betty shadowed Peters’ every move. As a kid growing up in Wesel, Germany, located in the northwestern portion of the country, his parents had a hard time keeping him away from dogs — especially if it was a shy dog. He explained that he’d always wanted to make friends with a dog, or try and get the animal’s trust. “I still find that nowadays extremely fascinating to deal with animals that have a little bit of a fragile personality,” Peters said. “And for those animals to come around, I find that extremely fascinating.”

Team USA dressage rider Steffen Peters at his home in Carmel Valley where he keeps his medals, including his most recent, a Bronze medal from the Rio Olympics. Photo by Tony Cagala

He found the same attachment to horses, too. At 7 years old, Peters was introduced to horses. His sister Anke was taking riding lessons at a pony club near their house, close to the Dutch border. Anke urged him to come along, he explained, and one day, he did.

ning, because it wasn’t that cool. Peters compares dressage to something like ballet or ice skating on a horse. In dressage, the horse and rider perform a number of complicated and intricate movements. “Everything is supposed to look extremely effortlessly from the rider’s communication standpoint,” he said. Applying leg pressure shouldn’t be noticed, the horse is supposed to look very steady and happy, he added. They’re judged on the expression of the movement, on the regularity of the movement and the harmony between rider and horse. Historically, dressage was a military discipline. According to the United States Dressage Federation, it began out of the need of military horses to be obedient and maneuverable. Over the centuries, a training system for the horses was established, and in the 1900 Paris Olympic games, equestrian events, such as dressage, first appeared. Peters is no stranger to the military either. In Germany, he served his mandatory two-year service as a driver of the Leopard 1 and Leopard 2 tanks. It would take him two times, though, to earn his license. One of the big no-nos of driving a tank on city streets, he recalled his instructor telling him, was hitting pedestrian curbs. “Because it flattens (the curb) because of the weight,” he said. “And I was 10 minTURN TO PETERS ON 16

RANCHO SANTA FE — In an effort to promote its integrative health series, the Rancho Santa Fe Library welcomed registered nurse and meditation facilitator, Laura Baugh, to speak about the benefits of meditation. Her visit drew in a large crowd in The Guild Room and triggered many questions from participants who wanted to learn more about finding peace and harmony in their lives. While Braugh gave specific tips to attendees, one piece of information she conveyed which many found interesting was to take part in not complaining for one entire week. “We don’t realize how much we complain,” Baugh said. “When we stop complaining we start accept- Laura Baugh speaks to patrons at the Rancho Santa Fe Library on the benefits on meditation. Photo by Christina Macone-Greene ing.”

It was Baugh’s belief that when people start accepting they are more present and grateful for what they have in their lives. Baugh went on to say that the joy in life really is in the small things — learning how to relax can help bring individuals to this point. “We are so tense,” she said. “The more we meditate, the more joy we have.” And the joy that emerges from meditation invariably encourages people to want to do more of it. For Baugh, it is finding that place of gratitude and devotion of something bigger than oneself. Baugh shared that when one stops complaining for a week, they should also implement noticing what is good, what they are grateTURN TO MEDITATION ON 21

A group of community members is trying to prevent the removal of 54 queen palm trees at the entrance to the new Whispering Palms development. Courtesy photo

RANCHO SANTA FE — The thought of removing 54 queen palm trees for new landscaping at the entrance of Whispering Palms has triggered some opposition from a group of community members. One of which is Richard Cavanaugh, the original developer of Whispering Palms. In the 1960s, Cavanaugh made the decision to plant those palm trees. In an attempt to keep the trees, Cavanaugh formed a grassroots campaign named KeepOurPalms.org. Cavanaugh hired Margolin &amp; Associates, a public relations firm based in Solana Beach to help raise awareness on the issue. A petition to keep the trees circulated, resulting in an estimated 100 resident signatures who are hoping that the Whispering Palms Community Services District (CSD) will reconsider the removal. For now, the elimination of the trees has been shelved until the results from that survey are in. In August, at the Morgan Run Clubhouse, a meeting took place regarding this topic. Due to the community feedback, the CSD decided to mail out a community-wide survey on whether or not the residents wanted to keep the current palm

trees. According to Lisa Margolin-Feher, a principal at Margolin &amp; Associates, over the last three years the CSD has stated on the record numerous times their plans of implementing new

It would be a travesty to remove these beautiful trees...” Lisa Margolin-Feher Margolin &amp; Associates

landscaping for entry medians. “Of the five elected members, one member, Bill Haynor, has voted consistently to oppose the plan,” Margolin-Feher said. The CSD meets on the second Tuesday of every month at the Morgan Club Clubhouse. It was at their March 2016 board meeting when the CSD presented three new landscape designs. The bid to remove the 54 palms trees and create new landscaping including king palms was TURN TO TREES ON 21